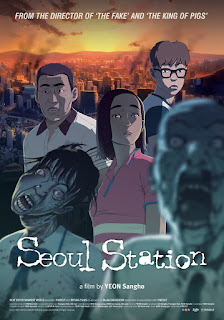 Yeon Sang-ho made an animated zombie feature, alongside his live-action Train to Busan, whose only real connecting factors are the walking dead and a brief return of a character from this animated piece. I really didn't want to spend a lot of time comparing Seoul Station to its speeding train infested companion piece, but alas, it is practically impossible to.

This film I may prefer to Train to Busan, as it feels more like a Yeon Sang-ho movie, and not because it is animated like his previous works, but like those, it has more in-depth character development, feels more thought out, and left a stronger impact. It is more harrowing and bleak, though never reaching the heights (lows?) of making you feel like crap quite like The Fake does ever so perfectly. While I think it is no masterpiece as such, I do think it could've been, but it just hiccups off and on throughout. 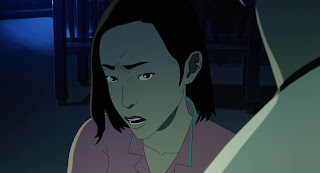 Like I mentioned, the characters here are better developed and while there may not be any characters you latch on to, save for the father, you do find yourself routing for and being annoyed with the survivors, as expected with a good zombie flick. The action and intensity Train to Busan has is also present here, though it is different in its own right.

I hate constantly comparing the two, but it is only natural to, for obvious reasons. I feel, again, this will fall more into line with what Yeon Sang-ho fans will expect, but it really isn't by the numbers. It tries to appeal more to the mainstream but never comprises its intellectual integrity and does the social commentary better and less aggressively so than Train. 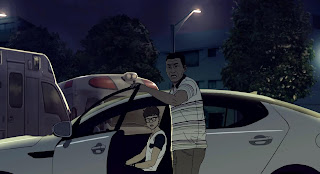 I never shook my head at this film, except at the amount of times the characters just stopped surviving to have a good old fashioned emotional breakdown. Trust me, I understand, but there is a time and place for that, and both are far more limited in this apocalyptic scenario. I can't fault a film for its idiotic characters, and I say idiotic, but one wouldn't be quite in the right frame of mind given the surrounding horrors and inevitable doom they are suddenly thrown into.

Without giving anything away, I absolutely loved the ending and in fact is one of my absolute favorites in recent memory. Let's just say, it is satisfactory, but in complete and unexpected ways. Sadly, the leading lady, though she isn't front and center, as I think the star role is equally split between three characters, isn't quite as fleshed out as she could've been, and her backstory left more to be desired from. It's vague, and touched upon, but ultimately doesn't quite bring in as much empathy when need be. It works and serves purpose, but I really wanted to connect with her more, not just in a survival instinct sense. 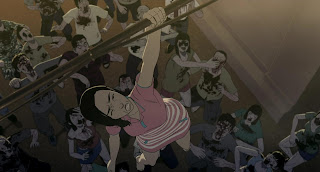 Seoul Station mixes the bleak and dark atmosphere and characters of Yeon's other animated features and also brings in the action and intensity that will appeal to a broader audience. That coupled with his clunky but beautiful animation style being at its best so far, and you are in for a great cinematic experience. Seoul Station may be my preferred of the two YSH zombie flicks and is definitely one of 2016's film highlights. My highest recommendation.