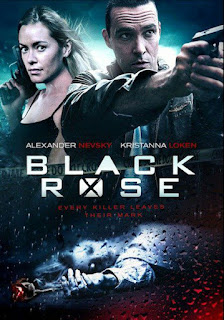 As a cinema fan for most things foreign, I find myself perplexed by the Russian film industry and eager to find out more about it. When the chance came up to be able to review the Russian/US film Black Rose, one that I had heard about a few years ago at first, I was excited to jump in and see what it had to offer. In a strange twist of fate, Black Rose attempts to replicate a Hollywood style by having some of the tones and feel of an early 90s action thriller instead of a film that uses its Russian ties to deliver a more diverse experience. Perhaps this is a way for Alexander Nevsky, who directs and stars in the film, to break ground with western audiences which has yet to really happen with his career, but it’s also makes for a watch that follows the formula a tad too closely. Still, there is plenty of things to enjoy about Black Rose and for fans of low budget cinema it’s a film worth seeing.

There is a killer on the loose in LA. Captain Dalano (Davi) is at his wits end in cracking the case as the Russian community where it is occurring is not necessarily willing to work with the police. That’s why he asks Moscow to send him some help. The help comes in the form of Major Vladimir Kazatov (Nevsky) who is partnered up with criminal profiler Smith (Loken) to dig into the case and end the string of murders that has everyone on the edge of their seats.

Considering some of the previous films that Nevsky has been in, my expectations going into Black Rose were that it was going to be an action thriller with an emphasis on the action. Between his stature as a body builder and the film tone that would see him pulling a role that perhaps Arnold Schwarzenegger would have had in his early career, I definitely thought that this film would be silly, loud, and larger than life. That’s the trick. It isn’t. As if to throw a curve ball into the expectations going into the film, Black Rose plays things very serious and straightforward as a police procedural thriller and instead of tongue-in-cheek one liners and ‘splosions it goes for some horror-esque imagery and subtle subtext about immigration.

On one hand, it’s a welcome deviation. Nevsky as a director has a knack for handling most of the atmosphere, particularly in the opening sequence that features the first kill that gets the audience in tune to what the film is going to approach, and it makes for a film that embraces some darker elements. It’s littered with some great casting including Loken as Nevsky’s partner, Matthias Hues in a small role, or the scene stealing intensity of Robert Davi that adds a lot of interesting tidbits to the cinematic landscape. On the other hand, it occasionally wants to be an easy to consume feature with some off beat humor in how Nevsky plays his character with stoic intent or the very brisk run time of 83 minutes. Sometimes the blend doesn’t mix. There are plenty of interesting ideas or character interactions that needed more time to be fleshed out and the plotting gets problematic and predictable as the film goes once it starts to pick up the pacing to wrap up all the loose ends. This leaves Black Rose feeling like a film that wants to be two things and can’t quite figure out the balance to make it work as smoothly as it might have.

As the credits began to roll, I will say that I was ultimately pleased with what Black Rose had to offer. For Nevsky’s directorial debut, he handles the visuals and pacing well making sure that it never hangs around too long to feel drawn out or boring as it goes through the motions and it has just enough charm and punchy moments to keep the audience invested in the plot, even when it starts to stumble a bit in developing its characters or cranking up the intensity in the final act. If anything, Black Rose is a solid choice to get Nevsky to break ground with a US audience and it showcases enough flash and bang that I’d be eager to see what he follows this up with. Go into Black Rose with the right expectations that the film is more of a thriller and enjoy it for the creative moments it has within the confines of being an easy to consume genre flick. It comes with a strong recommendation.

In the mean time, go to the site blackrosemovie.com to find out more and check out the film when it hits theaters on April 28th and on home video soon afterwords.

Written By Matt Reifschneider
Posted by DarkReif at 6:48 PM