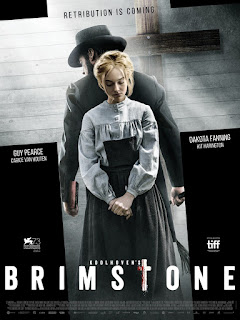 It’s almost unfair to call Brimstone a horror or western simply because this is a film that refuses to succumb to the tropes of any one genre. On the surface, yes, it’s about a vicious reverend that seemingly tortures a young woman throughout her life, appearing in increasingly violent and malevolent ways to continue her torment… which certainly sounds like a horror movie set up with a western setting. However, Brimstone uses western motifs, dramatic pacing, horror themed elements of tension and dread, and an approach to its narrative that lifts it above being ‘just another horror movie’ or ‘just another western.’ This is a film that’s meant to be an intense and still often subtle roller coaster of commentary, character study, and cinematic craftsmanship. It succeeds at doing it all and is going to be one of the underdog best films of the year.

Liz (Fanning) is horrified when she learns who the new reverend (Pearce) is at their church. She has finally started a family with her husband, his son, and their daughter together and they just want to live peacefully. As things start to escalate though and her family is threatened, she will have to remember who she was before to find the courage to escape the sadistic torments of a man who continues to haunt her.

Perhaps the key for Brimstone to succeed as well as it does as a heavy and often abrasive cinematic experience is that writer/director Koolhoven opts for a strong balance between smaller moments for characters, dynamic shifts in narrative storytelling, and intense genre punches that don’t hesitate to shock. It’s a wild, wild ride. This is a film meant to hook its audience with lots of questions about the history of our protagonist and antagonist while it proceeds to drag them kicking and screaming through a dreadful tale as two complex characters are interlocked in a life time of conflict. Using a time leaping structure, presented in four chapters, Brimstone throws in a variety of twists and discoveries for its audience that continually keep them hooked into the film even through its robust run time. Hinged on a variety of phenomenal performances, in particular note to the sheer hope devouring screen time by the cryptic and terrifying Guy Pearce as the villain and his hope driven counterpart played with low key intensity by Dakota Fanning, Brimstone uses a high art style of narrative to tell its often-exploitative story. It’s the best of both worlds and while it might be too dark and intense for some casual viewers, those looking to embrace it are going to be in for a treat.

As a bonus to expressing a thoughtful, dramatic story, Brimstone is also brimming with commentary. Originally, I had planned to really explore some of its themes about family, feminism, extremism of belief, and its general approach to good and evil, but most of the great elements about the film stem from how a viewer interprets the many character interactions and approach to telling the tale. To not ruin the experience for others, I’ll just say that the film does an admirable job at creating parallels between current concerns in society with the story that it’s telling. It’s an added layer that makes the film resonate much more effectively and intensely than just being a strongly executed piece of cinema. As the film garners a bit more attention and its cult audience, it’s these layers that will make it the classic it is destined to be.

Truthfully, the only real issue I had with the film was how it handles the two leads’ final encounter. It’s atmospherically tense and dense, but it ends in a very clean cut manner that seems a tad out of place for the build that was leading up to it. Brimstone never hesitates to throw in some off beat elements, naturally, which add to the dynamics of its story as characters seemingly pop in and out of the our heroine’s tale, so it’s not completely out of the blue. Of course, it quickly makes up for it as the film draws to a close with some intriguing round about commentaries that inject some strong social commentaries about the entire film and an finale that I didn’t expect, but after almost two and a half hours I wanted a tad more out of that final moment. When a film is this good though, it’s hard to be overly critical of the minor issues on hand.

Still, for those looking for a truly horrific and intense cinema experience, look no further than Brimstone. It’s impressively executed from its production values to its artistic narrative to its balance of genre elements and it ultimately features some of the best performances of the year from the entirety of its cast. In a movie landscape where genre films double down on their tropes to make things easier to consume, Brimstone is dramatically fresh and aggressive in how it approaches all its labels, adding in enough commentary, character work, and shocking twists to make it one of the best films of the year. It’s not for everyone with its abrasive elements, but for those willing to be taken to hell and back for a movie viewing experience then this is a must see, must own, must praise kind of film.

Written By Matt Reifschneider
Posted by DarkReif at 4:15 PM