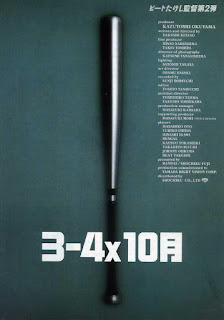 When I initially had watched Boiling Point about a decade ago, I did not like the film whatsoever... and admittedly my understanding of cinema and my growth as a person myself has greatly changed my outlook on what was my least favorite Kitano film back then. I truly believe that Kitano's sophomore effort is a very well made film that deserves to be more sought out by movie goers.

A struggling young baseball player, whose coach is an ex Yakuza member, finds himself spiraling down into the cold world of gangsters after an incident turned violent at the gas station / motorbike shop he works at. Essentially it is a simple tale of a man being sucked into this Yakuza world and nothing more. Kitano is known for his gangster films, and while this is weaker than his others, such as Sonatine or even his debut, Violent Cop, it still manages to find an identity of its own and stand out in his filmography. 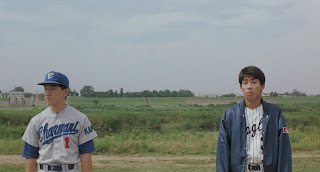 Boiling Point takes that black humor Kitano is known for, dials it up to 11, and throws in a very odd and uncomfortable atmosphere that is sure to make you feel uneased at almost all times. Also, Kitano takes what you would expect to happen in a story like this, and pulls the rug out from under you. The focus that supposedly lacks is done so, very much intentionally, just to perhaps to annoy his audience. The main character suddenly gets thrown to the wayside when Kitano himself waltzes into the picture, playing a most heinous wandering gangster.

There are a ton of characters to keep up with as usual, but it is all handled and balanced quite well, even if unorthodox in its structure. While I didn't quite care too much for any of the characters, the twisted lives they were painting for themselves had me completely engrossed. 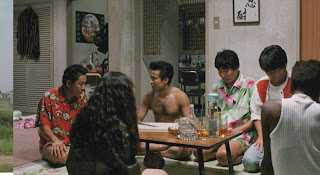 The film is very dry, but often humorous at times. The shifts from laughing to feeling disgusted is very rapid and happens numerous times, and I must give it props for that. Not everything works as it is supposed to but when it does work, and more often than not, it does so in spades.


Boiling Point is a strong effort that comes up a bit short in the end, but it is a film that I appreciate much more now than before. I see what he was going for and think he mainly achieved that. Unlike most Kitano films though, this is one I won't be visiting again anytime soon, and I'm fine with that. It is a tough watch at times, but a must see for Kitano enthusiasts.