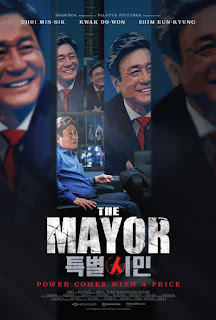 Choi Min-sik is an actor whom I can always follow no matter the choices he makes as whether the film he is in is good or not and he always delivers. In The Mayor, Choi not only lives up to his wonderful reputation, but he gives one of the finest performances of his career yet.

The Mayor is a political thriller loaded with twists and turns at every corner. Choi Min-sik plays Byun Jong-go, the mayor of Seoul, who is running for a third term, and if elected he will be the first in the history of South Korea to do so. In his opposition is Yang Jin-joo, played effectively by Ra Mi-ran, a rough contender in the race to the top in what folds out in a total war.

To be honest, and without dipping to much into myself and detracting from the film's review, I have never been too into politics. I've found it interesting and, of course, have had to engage in it, but it feels above me in some regards thus leaving my knowledge of that world limited. I pursue other things, but what I am getting to is that this film really sucked me into its complex world which was surprisingly easy to follow. There is a lot going on here and it is all very layered, but it manages to find balance in its execution even with so much chaos coming and going in every direction.

Kwak Do-won (The Wailing) gives a solid performance as Choi's second in command and Sim Eun-kyeong (Sunny) left the biggest impression on me as someone new to Byun's political party. Her performance is the most subdued of her career yet, but it has a gravitas to it brought out in her subtlety. It also helps that she seems to be the only sane character in this rat race.

I really enjoyed The Mayor and much more than I expected to giving that the subject matter is not appealing to me so much personally. It is full of corrupt characters, and plenty of things to keep you guessing. The film constantly shifts your opinion of its players and who you are rooting for, if anyone at all at times, and I think it is genius in that sense.

Technically speaking, it is a beautiful film. Nothing is too stylized and it lets the performers be in their zone, but it is also retains its own particular look, which is very naturalistic, that compliments the overall feel of everything. I believed I was in middle of everything and that is worth praise. I know I tend to nitpick film scores a lot, and while this one didn't bother me too much, it seems to swell up a little too much for its own good at times, ultimately being a distraction during some important emotional moments.


From the very beginning, The Mayor runs its race with confidence, and will ultimately have the vote of many movie goers. See this one as soon as possible and prepare to have yourself sent on a roller coaster ride. Sure to be one of 2017's unexpected hits.