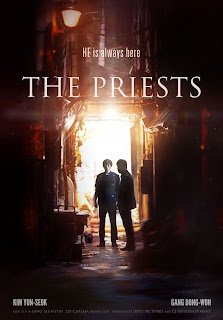 A film that starts off rather weak and slowly builds its way into something great along the way, The Priests is a film that despite its many flaws, I can say is a great piece of work.

The story is simple... a priest had been exorcising a young schoolgirl of her demons for months and enlists the help of a student as he realizes there are far too strong a forces within her. That's pretty much it, plot wise, and the film works as more of an entertaining popcorn movie than a thought-provoking horror flick.

Priests works very well due in large part to the powerhouse performances from its trio of leads. Kim Yeon-seok gives a subtle but dynamic turn in as the disgruntled priest with nowhere to turn. His pain runs deep and his eyes hold so much intensity. Kang Dong-won pulls off a very young-at-heart student who is very loyal (ehh?) to his craft. He does take his faith serious, but doesn't mind sinning for a bit of fun. Lastly, but most stunningly, Park Bo-dam gives off the most spine-chilling yet heartbreaking role as the possessed girl. She is utterly creepy and covered me in goosebumps on more than one occasion, stealing the show without a doubt. 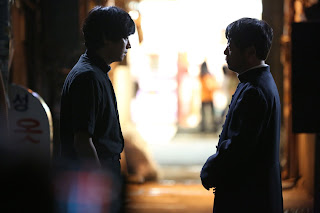 The cinematography along with the editing make for a near perfect experience later on, but once again, after a rushed and sloppy opening. There are some really poor choices visually at first, but not enough to completely take me out. I really wish the first act had been hammered out more. It really feels amateurish in comparison to the strong second and borderline masterful third act.

I won't go too much into the details on the actual exorcism scenes, as that is what anyone who goes into these types of movies, seek them out for. It's a bit too familiar and tried at times, but the excellent performances, as aforementioned, hook you in and only have you think of the cliches upon reflection. 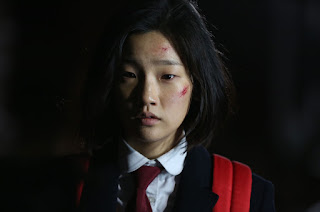 I may seem like I am hounding on the film, and I am not in denial of its many flaws, but I would be lying if I said I didn't enjoy it thoroughly. It's a very strong acting piece, it just often treads too familiar a ground for its own good. With a bit more of its own identity, The Priests could have been an amazing film, but unfortunately that is not the case. Still, a very entertaining movie worth scoping out, especially if you are looking for a well made possession film.