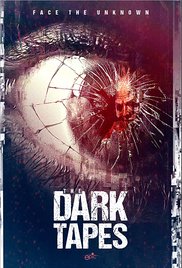 One of the blessings about an anthology film, a subject that seemingly comes up time and time again with the continued popularity of the format, is that a film can cover a lot of ground with little money and give opportunities to a variety of talents. Anthology films do contain some flaws as a whole, balancing the tone or pacing for example, but a great anthology film is something to behold. That’s what makes The Dark Tapes such a fascinating flick. Despite some flaws as a low budget indie flick, it brings a lot of interesting ideas and executions to the table that make it one of those films that wins over its audience with its lofty aspirations more than anything else. While The Dark Tapes may not be one of those films that is going to spark with a more mainstream audience, it’s definitely a film that showcases a lot of talent for a low budget horror anthology. A fact that should have the attention of horror fans looking for the next underground cult film.

As the credits began to roll on The Dark Tapes, the main thing that stuck out about the film was just how cohesive it was in tone and style. One of the double-edged aspects of anthology films is different segments will often have different styles or looks, but this film works impressively in that it feels more consistent. It helps that the initial concept is that all the segments would be found footage in their approach, similar to what V/H/S used as an approach initially and gives the whole film a certain angle, but even beyond that the film flows well and has a very even texture. Even as each of the stories changes in focus with aliens, alternate dimensions, cults, or haunted houses, it remains a whole. This can be one of the harder aspects to nail in an anthology and The Dark Tapes utterly hits it stride for stride.

From there, The Dark Tapes can be a bit more hit and miss as a film. The direction, editing, and performances from the actors can all be a bit patchy from segment to segment, hitting some high notes in the wrap around story that has three people trying to figure out if there is something to investigate in night terrors and hitting some lows with a cam girls story that just seems to pale in comparison. Each segment has its own highs or lows, although most of them have great little twists in the end that homage those big moments that The Twilight Zone made famous, and there is a creativity as the film makers work around their own boundaries that boils up in many subtle ways. Truly, as salt in the wound, the biggest obstacles for The Dark Tapes is its budget. If directors Guastini and McQuown had the amount of money and pool of talent around them that other horror anthology franchises like V/H/S or ABCs of Death have, then this might have been a high mark for the year.

As is though, The Dark Tapes is an ambitious and worthy little indie horror flick that fans of the genre will want to check out for its creative segment twists and strong sense of cohesive tone/style. It suffers a tad from its budget constraints and limited resources. What could have been major issues that would derail other films like the previously mentioned lack of resources, The Dark Tapes uses to its advantage to showcase some of the talent and raw style of its teams. Not a film for everyone, but one that I suggest horror fans support for its ambitious nature.

Written By Matt Reifschneider
Posted by DarkReif at 12:02 PM