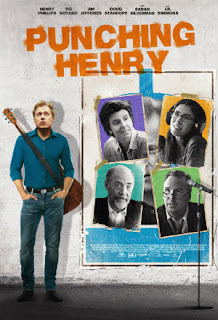 Ah, the indie comedy. Recently, the indie comedy has been overshadowed by big, loud raunchy comedies that dominate the cinemas and it’s left them to occupy a small niche of the genre. At this point, I’m hardly an expert on comedies and generally avoid most of them on the principal that that I hate being told something is funny rather than finding it as funny. However, after seeing the trailer for Punching Henry I found myself intrigued. A dramatic comedy about the struggles of a touring comedian that covers the development of a group of TV execs wanting to make a dramatic comedy show about the struggles of a touring comedian? It was just meta enough that it could work as both a comedy and a drama and it featured a slew of famous cameos. However, the problem is not in the idea behind Punching Henry, but more along the lines that the film itself isn’t dynamic enough to sell its concept. It’s almost so “indie comedy” in its approach that it trips itself up and fails to fly like it might have. This is the kind of film that will find its cult audience with its premise, which is why it’s being reviewed here, but for the more casual comedy fan it may not strike the usual fancy.

Henry Phillips (himself) has an opportunity. His manager has scored him a meeting with a big time TV executive Warren (Simmons) who wants to make a show about his struggles as a 40 year old touring comedian. This brings him back to LA, a place that once chewed him up and spit him out, to try and find a new groove and perhaps a new chapter in life. Is it a chapter exploring though?

The comedic work of Henry Phillips, who plays himself in the film and co-wrote the script, is one perfect for the kind of indie comedy tone that Punching Henry is going for. He’s low key, awkward, and handles everyday situations in a strangely endearing manner that’s ripe for comedy. However, his low energy approach to everything tends to also be the one thing that hinders this film from reaching its heights. It’s a film that feels flat and lacking dynamics. It tries to raise the stakes with some hilarious situations and great witty dialogue, but from scene to scene the film doesn’t necessary feel an urgency to tell its story. This is a choice made by the film makers for it, considering his style of comedy it fits with the tone and approach, but as a film it makes for a rather even keeled experience that doesn’t necessarily get the audience invested as emotionally as they need to be for the dramatic pieces to work their magic. It just ends up being a series of slightly humorous situations for Henry Phillips to do his shtick to and ends up being pretty disappointing.

However, the meta concept does work some great moments into the film. The film is told as a kind of series of recollections from Henry Phillips while being a guest on a talk show which benefits the structure of the film when he comes back to Los Angeles for these TV show talks. This helps out the narrative flow of the film immensely as it allows Phillips to leap from odd situation to odd situation and deliver his viewpoint on it. The best part of the film though is the meta idea of a film being made about Phillips in a film that’s about the same subject matter. Occasionally I wanted the film to run further with that, in less subtle ways, but it still remains the reason for anyone to see this film. It’s a commentary on how comedians are seen in a changing world where everyone tries to be a comedian online or you need a viral video to make a namesake for yourself, whether you like it or not. In this sense, Punching Henry is a success.

All in all, Punching Henry has a smart concept with enough dramatic heart and witty moments to justify it for those who enjoy indie comedies. Unfortunately, for those more casual fans the lacking dynamics of the film itself, the low energy, and even tone make the film one that is a tad underwhelming considering how good the idea is. Punching Henry will certainly find an audience that loves it, but go into the film with tempered expectations to enjoy it for what it is.

Written By Matt Reifschneider
Posted by DarkReif at 10:12 AM