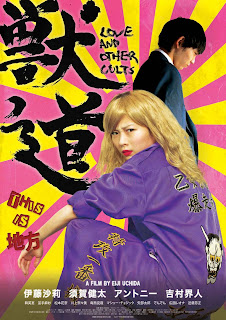 
Eiji Uchida has become a household name with indie distributor Third Window Films, leading the company to jump into the production world 100% on their own with Lowlife Love. With the surprise success of said project, Adam (TWF) and Eiji have teamed up once again for another crazy and wonderful production... Love and Other Cults.

Ai is a girl who is budding into a young woman, but the world she inhabits seems to vehemently reject her existence, and she finds herself hopping about various groups of living, seemingly absorbing herself in blend as a chameleon, only to shortly thereafter continue that hop. Along the way she meets some interesting characters, all nasty in a certain sense, but as the story unfolds, so do the reasons behind these characters brokenness.

One of my favorite elements of Love is that characters do come and go at a rapid pace, as in they stay but aren't there at all times, but each seemed to be fleshing themselves as things carry on. There is a lot that goes down in this roughly 90 minute feature, but it is all balanced and handled masterfully, even when things get out of hand, which they often do.

Seems this film takes reoccurring themes, such as self-identity and examination of religion, from Eiji's previous works, Greatful Dead and Lowlife Love, and blends them into something new yet familiar, but ultimately fresh! Love is as darkly funny as it is heartwarming at times. It is surprising the amount of emotions this put me through while simultaneously being completely entertaining. While I don't believe it to be a masterpiece, it is the closest to one the director has crafted thus far.

There is social commentary on the purpose seeking youth that I know rings true even outside of its Japanese setting. Kids go through a lot, and while their own actions shape who they are in the end, sadly their stories are often left unwritten due to the extreme living circumstances they are forced to attempt to grow up with. The best thing about this side of the movie is that it never becomes blatant in its message nor does it dive into cryptic symbolism that only highbrow art aficionados will attempt to decipher. It entertains firstly whilst holding a mirror up to society as it does so.


I enjoyed the lead character of Ai. She is broken so very much,but she never stops seeking out purpose and a place to belong, no matter how ridiculous that mission becomes. Religious groups pull her into their worlds, along with prostitution, a seemingly picture perfect family, and even the adult entertainment industry. It is insane the amount of crap she endures, but you can't help wanting to see her break free and find herself. I think the romance between her and the boy who follows her around from school works, though it never reaches the heights of my favorite side character, played by Antony.

Comedian turned actor Antony marks his debut in Love as a gangster who is looking for a way out, though he doesn't immediately know that. Without spoiling, he has by far the most interesting and rewarding arc, even surpassing Ai in my eyes. I really wanted his subplot to break away from the main story and go on into its own feature. It's not to degrade the main arc, just the side dishes in this one are just as good as the main course.


I could go on and on about this new Uchida flick, but I will closeout saying that this may be his best work yet, though it does go pretty neck and neck with Lowlife Love. It is bigger, prettier to look at, but never shies from its message for the sake of entertaining nor visa versa. It is just the right blend of fun, and leaves you thinking when it is all said and done. I have seen a lot of great films in 2017 already, but the zany heart of Love and Other Cults help it to shine a bit brighter than the rest of the pack. See it when possible and make it a priority!