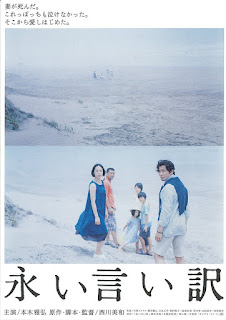 Dreams for Sale, Miwa Nishikawa's previous directorial, is in the top echelon of my favorite films ever made. I think it is a true masterpiece, in every sense of the word, and an amazing character study on what humans do in desperate situations for money. I could go on for hours talking of that film. Knowing just how highly I praise that piece of work, I believe Miwa may have just put herself out there with an even better slice of cinema with The Long Excuse.

Sachio Kinugasa (Masahiro Motoki | Departures) is an award-winning novelist who has recently lost his wife (Eri Fukatsu | Villain) to a tragic accident that occurred when she and her friend, Yuki, were aboard a bus that slid off road into an icy river. As tragic as this all is and the damage it does to the numerous other peoples' lives affected by this devastating event, our lead Sachio seems to be relatively unaffected whatsoever. He is thrust into the spotlight, which he is used to being in, and he gives it his all to act sad, but the tears never come.

I don't want to and won't go in too deep with the story for fear of ruining the emotional journey you slowly embark upon with this one. It's not as if it has any crazy plot points or twists, but the material is so well handled and masterfully executed, I worry about even slightly taking away from the core experience of someone who may potentially go into this from this point onward. Essentially, Sachio is met by the husband of Yuki, who went out with his own wife on that fateful day, and if only by obligation, he is sent into the lives of this family who isn't like he is. They are all (the husband, son, and daughter) affected by the moment to a different degree, by which they cope differently. 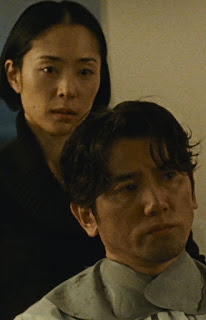 Nishikawa adapts The Long Excuse by her own novel of the same name, which really seems to only positively work in the film's favor, as the characters are all so well developed that by the end I felt as if I had known all of them for such a long time. They elevate the character label, which certain realist films like this are sometimes haunted by, and they all truly feel like real human beings. I never thought of Masahiro when watching this. He is Sachio and that is a testament to the talent of Nishikawa in her direction and the performances she pulls from her cast members. I think Masahiro is great in Departures, the role everyone knows him from, but he is on the total opposite end of the spectrum here and, in terms of his character, is easily above his already solid level of performance.

The supporting cast is great too with Pistol Takehara embodying perfectly the mourning husband in loss. He is broken, but manages to get behind the wheel every night and drive a truck for endless hours to provide for his shattered family. The two children also really shine, each perfectly performed beat for beat and both subtle in their performances while emotionally intense when necessary. As crazy as it may sound, I believe these four all deserve some award nods, somewhere. They accurately depict the complexities at hand when there is a loss in the family and the story shows with painful detail just how and what it does to a family as a whole and to each member individually.

The Long Excuse is a beautiful film to look at and its visual style is much different than Dreams for Sale, which I must note is the only Miwa Nishikawa film I've seen outside of this one. It appears to definitely be shot on film versus digital. I think I may like the more sleek look of Dreams when comparing the two, but this works aesthetically for the story at hand and feels all the more intimate, echoing to some degree her cinematic teacher, Hirokazu Koreeda. I wouldn't say it is in his style entirely, but it feels familiar without feeling like a copy. It's more of a touch of influence versus a 'in the vein of' phrase that everyone slaps on everything seemingly.

In terms of the score, it is subtle, and never once became intrusive. I have heard that it isn't always the iconic scores that deserve the biggest praise, but rather the ones that you don't notice; the ones that do no detract from your experience, but rather blend themselves into the overall cohesive experience. That is the case here. I can't really remember any standout pieces, but I was always entirely absorbed. Films tend to have the habit of getting too loud, but it never happened once here and I am grateful for that. 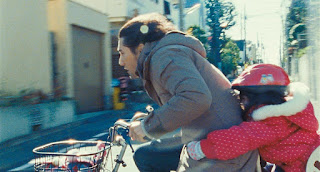 By now, if you haven't figured it out, I was truly swept away by the power of The Long Excuse. It's one of the finest character studies of a broken being that I've ever watched and a deep examination on a family in a state of loss. I really must be careful with what I say, but I can assure you that each of the four characters have an arc that is fruitfully developed and all payoff in some way or form. It never beats you over the head with its ideals or philosophy. I think it really strips us down as human beings and reveals just how dark and disgusting we can be while in the same hand revealing the beauty in us all. We all do heinous things, some worse than others, but we all have that core element that binds us all together: love.

Aside from a few potential candidates that I've yet to see, which I won't get into here, The Long Excuse has earned its way beyond other choices to become my new favorite film of 2016. It may not be as widely seen as some of last year's big hitters, but I dare you to watch this and not be moved by its examination of loss and how we as individuals cope with tragedy when the closeness of one is suddenly removed. How do we fill holes in our heart? I think it is a great study of that very question. An absolute masterpiece.