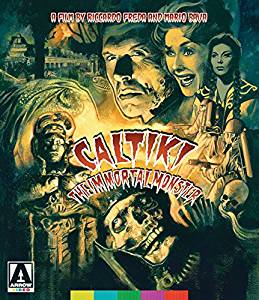 Outside of the name Mario Bava being included on the front artwork, my knowledge of Caltiki, the Immortal Monster was pretty limited. The name has popped up a few times during my work on some other Mario Bava reviews, however, there wasn’t any indication that it was a film that would eventually be getting the pristine Arrow Video treatment. Now that it has, it’s easy to see why there would be a cult fan base for this film. For one, it’s co-directed (uncredited and from various sources described as fully directed) by the prestigious Mario Bava and his fan base seems to only grow larger and more ferocious with each passing year. The film certainly shows a lot of his trademarks and Gothic tones he would use in his solo work in a handful of years. Secondly, Caltiki is the Italian version of the classic 1950s monster movie and could easily fall right into the same categories as many of the Hollywood or Japanese films from the same period. Thus, fans of Bava or the 50s monster flicks are going to want to seek out Caltiki no matter how effective the film is as being either.

Explorers down in Mexico have found a great discovery, an underground cavern that may have been where the ancient Mayans sacrificed people in the name of their god, Caltiki. When their trip becomes disastrous for one of their team and it leaves another one horrifically injured, run back to civilization with part of a mysterious creature in tow. Little do they know that this thing is beyond their understanding and it will leave a trail of destruction in its wake.


Running at a brisk 77 minutes, Caltiki, the Immortal Monster is the kind of film that’s meant to entertain more than anything. The steady and quick pace of the film and its narrative development does it a lot of good as it will jack-knife around various monster movie influences as it goes. The film starts off by stealing a lot of story and visual influence from Creature from the Black Lagoon as we are introduced to our expedition in the jungles of Mexico. This opening act utilizes the visual style that would later become a Mario Bava trait as it blends fantasy like elements, surrounding the Caltiki cavern and the local dance ritual, and some of that classic Gothic tone into a more classic monster movie set up where a hero scientist and his team uncover the titular monster. Perhaps the best part of the film though, outside of its confident use special effects no matter how good they are, is the idea of the two couples as the protagonists. There is a kind of romantic triangle formed here that adds quite a bit of depth to the proceedings. At 77 minutes though, Caltiki hardly embraces the emotional dynamics to parallel the changing interactions between them with the devouring monster at the crux of the film as much as I wanted, but those themes are there and they highlight what the film does.

As it goes though, Caltiki continually changes its shape and size like the monster. By the second act, it’s gone full Blob with its scientific experiments and random explanations to the existence of the creature which in all classic 50s fashion comes down to the easiest explanation of all. By the third act, it drains its budget by having a full-on monster vs. military showdown, complete with model kits of tanks and the whole thing. A big selling point of these final two acts are, once again some of the nice Gothic tones and visuals that accompany the classic monster film tropes and the continued presence of a shifting dynamic between the two couples. Still, the film could have gone a bit farther on the latter, in particular as one starts going insane from his injury by the monster in the first act, and it feels as though it is left hung out to dry at times. Even the main monster plot suffers a tad from very convenient plot progressions to get the film shifting into high gear where entire subplots are added (a police station escape feels a bit like padding) or entire plots are abandoned very quickly.

Caltiki, the Immortal Monster is a film that will, for sure, find and satiate a couple of different niche audiences. Fans of old school Italian cinema will enjoy seeing the industry’s attempt at the 50’s monster movie, fans of Mario Bava will love the Gothic tone and early development of the visual style that it fringes on, and fans of monster movies will love to see what it does to take on a variety of influences and tropes. The film is not nearly as deep and effective as one would hope, missing out on developing its two couples parallels and feeding into its pacing too much in an effort to remain entertaining, but it’s fully deserving of the treatment it has received from this latest Arrow Video release. Here’s to hoping Caltiki finds its audience. 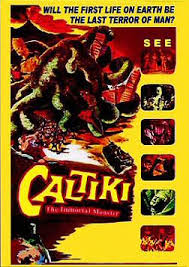 Written By Matt Reifschneider
Posted by DarkReif at 4:17 PM