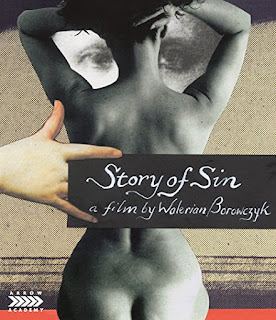 Truthfully, I’ve only seen three Walerian Borowczyk films before this and I’ve only enjoyed one, the surrealistic horror flick The Strange Case of Dr. Jekyll and Miss Osbourne. When Arrow Academy decided to release his Cannes selected film Story of Sin, I kept my reservations tight. Much to my surprise, being the fourth film I’ve seen of his, Story of Sin is easily my favorite thus far and is completely deserving of the top tier treatment it has been given on this packed Blu Ray release. It’s a film that is not nearly as overzealous in its style as the others I have seen and instead uses it to truly enhance the dramatic story being told. It’s still a film that features this style, but it’s more subdued and impactful rather than over the top which is what makes Story of Sin a more effective film than what I’ve seen previous. As a bonus, this Arrow Academy release is ridiculously loaded with extras for fans of the director or those looking to dig into what he offers and even my hesitation towards him was appeased by the obvious love put into this release.

Ewa (Dlugolecka) has just met the man of her dreams. He’s an anthropologist named Lukasz (Zelnik) and he’s a lodger are her parent’s house for the time being. When they are swept up in their romance off to another city and he goes to get a divorce from his estranged wife, she will find herself in a series of increasingly degrading situations that will leave her a much different woman that when she was at home.

What makes Story of Sin so interesting is that Borowczyk takes what normally might have been standard dramatic story of love gone horrifically wrong and gives it a blended approach between being a character study and a dramatic tale saturated with satire. Films that center around a specific love, doomed or not, tend to show the audience the proceedings from both parties involved (if not more characters), but Story of Sin focuses on the viewpoint from Ewa throughout the entire ordeal. This, of course, plays into the narrative scheme that she is meant to navigate a world without him later, but it also allows the audience to really see the downward spiral that her mental state takes as situations get, in simplistic ways of saying it, worse and worse. This allows the film to really use its talented cast, lead by a fantastic key performance from Dlugolecka as Ewa, to drive home a lot of the subtleties of the script and the low-key satire. Even when it establishes a rotating series of secondary characters that come in go in Ewa’s life, each performance seems spot on for their limited time and a creates a wonderful sense of ebb and flow to the narrative while never missing out on the dramatic punch. It gives the lead time to react, but not enough time for the audience to fall into a groove as it continually pushes forward…in a nice parallel to how life works from the viewpoint of one person.

Then there is, naturally, the sense of pushing boundaries that Borowczyk loves to use in his films. As I mentioned, earlier one of the things about the films I’ve seen from the director is that his style tends to devour the rest (although plenty of people love it understandably so), but with Story of Sin it seems to be in a more justified balance. He loves to fringe on dark territory and does so numorous times in the film, particularly once scene with child birth that’s given a frantic dream like haze, but with its thematic parallel about the way that men use women for their own regards and using the sexual tones to further that message, it all seems much more fitting and cohesive. This is not a film for the weak of heart in many of these regards as it touches on some very sensitive material (it’s called Story of Sin and it’s directed by Borowczyk, so that’s an indicator) but his style here is not necessarily meant to shock as much as it is a part of the narrative and character pieces in the film.

Granted, the film is not perfect still, as the narrative does take some intriguing twists that don’t always flow with the themes and progression of the film (an entire commune piece to kick off the third act seems oddly out of sync with the rest of the film), but it’s hard not to admire the balance that Borowczyk strikes here in Story of Sin. It’s artistic, still abrasive when it needs to be, and ultimately an engaging film that tells its story with depth and real emotional resonance. It’s understandable why Arrow Academy decided to give this release so much, packing it with all kinds of features on disc and in booklet that indicates the community appreciation for the director and this film, and for cinephiles Story of Sin might be the sleeper release that’s a must own for the year. 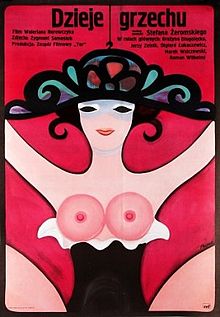 
FIRST PRESSING ONLY: Fully illustrated collector s booklet featuring new and archival writing, including an exclusive interview with the producer of Story of Sin, director Stanislaw Rozewicz; a text by art historian and one-time Borowczyk collaborator, Szymon Bojko; and excerpts from Borowczyk s memoirs presented in English for the first time.