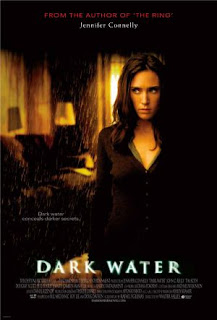 There are times when I feel bad for a film like Dark Water. As a film, on its own, it’s more than solid. It’s damn near impressive and features a phenomenal cast and an effective narrative flow that uses its dramatic heft to add to its ghost story horror antics. Yet, it remains in that strange category of forgotten films simply because it wasn’t as good as the film it was a remake of, in this case the J-Horror masterpiece of the same title. So fans of the original can’t help but either despise it for being a remake of a great film or refer to it as a footnote when referring to the original. On its own though, Dark Water is still an effective supernatural thriller that does a lot of things with great success even if too many people have forgotten it exists. It might not be as good as its predecessor, but that doesn’t deter it from being solid on its own two feet.

Dahlia (Connelly) is going through a rough divorce from her emotionally aggressive husband (Scott). Her daughter Ceci (Gade) is caught in the middle as her mother must move to a place she can afford and pick up a job to support them while continuing to fight for custody. Their new apartment is not in the best of shape though and the building it resides in is in desperate need for attention. This is only one problem as Ceci becomes infatuated with her new imaginary friend Natasha. When her mother starts to notice odd things too, she begins to suspect that Natasha might not be nearly as imaginary as she assumed.

In a lot of ways, Dark Water takes many notes from the success of the American version of The Ring as a blueprint for its successes. In particular, it ‘Americanizes’ the film by taking the atmospheric approach of its J-Horror originator and then tries add in more plotting so that it’s less vague and more upfront with its themes and storytelling. Most of it works here, although I would be hard pressed to say that it’s an improvement in the narrative as it does take away the ambiguity and open interpretation of its themes that made the original such a dynamic film. Dark Water tends to over explain a lot of things, albeit in a natural manner with its dialogue, and it makes sure that some of the more vague experiences are more upfront in hooking its audience particularly in the third act when it attempts to blur the lines between supernatural and reality in more drastic manners. Dark Water still works as a story about some of the social obstructions that work against a single mother in the circumstances of its script and for that it deserves some credit.

While the narrative approach might be more straightforward and occasionally predictable for those familiar with supernatural drama thrillers, it helps Dark Water a lot that it is impressively executed. Salles as a director maintains the tone and sense of a heavy building tension throughout the film that adds to the dramatic appeal of its story and it has a stellar A-list cast to build a lot of that on. Jennifer Connelly shines in the lead as a mother coping with her own demons in conjunction with the ghosts in the apartment complex and she is supported by some stellar secondary roles. Dark Water boosts a lot of the smaller roles from the original into stronger pieces for its actors and a cast that features Tim Roth, John C. Reilly, and Pete Postlethwaite take full advantage of it to shine. If there were any pieces where it misses the mark, it’s in many of the ‘scary scenes’ that are played a bit too conservative for their own good. It’s not a huge issue as they still work within the focus of tension and atmosphere, but they do come off as a mixed effort overall.

Like other solid remakes that fall short of the predecessors, Dark Water is worth it to watch but ultimately does seem to be a shade short of truly hitting the magic mark. The comparisons to the original will always be made and it overshadows much of the strong execution and thoughtful changes that are made to the film to appeal to a different core audience. On its own, Dark Water is still a great dramatic supernatural thriller that rides the wave of impactful performances and the focus on tense build. If only a few more people would give it the time of day (or even remember it exists) then perhaps this would have developed its own cult following like the original J-Horror classic. As is, I’ll feel free to stand up for this one as a strong film on its own merits even if others don’t. This gets a solid recommendation for people to revisit or check out for the first time whether or not you are a fan or have seen the original.