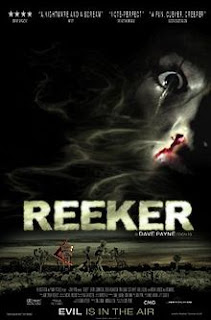 "Reeker" was somewhat of a challenge for me. Despite all of the solid things about this low budget 'smart' horror film, I innately felt as though the film was not all there. Like its smelly and fast moving villain, "Reeker" is fleeting with finishing anything off. It starts with some great ideas, throws in a solid twist at the end, and even gives us some fairly cheer worthy protagonists, yet as the credits rolled there was a void where all the connections didn't quite come together...least of all make sense.

A group of college students are off to the biggest party of the year and road tripping through the desert seems like a smooth idea. If you are a horror fan, you know that this is not the cast. After their car breaks down at away ward cafe and gas station, these young folk find that their world seems a big different. No one else is around and a mysterious smell keeps coming up. A smell of death. A smell of the REEKER!

There's a smart idea buried in "Reeker". It's fun, Stephen King style idea that carries the film for the most part. It carries it through it's hit or miss acing (although an appearance from Michael Ironside earned this film a bit of merit) and it's hit or miss 'made for TV' look and directing. It was this mystery to its plot that really kept me watching despite feeling as though it didn't make a lick of sense through the first two thirds of the film. This is truly the highlight with its interesting twist that made "Reeker" worth the watch.

Beyond that though, this film feels only half way there. As I mentioned, the acting is hit or miss with some charming performances, but nothing to write home about and the directing/design for the film flounders by the numbers for this kind of film. The dialogue can be rather silly (particularly from the ditzy character Cookie) and doesn't quite cut it when it comes to intriguing.

The biggest flaw comes in the form of its twist though. It's a great idea that is played out (and explained) to answer those nagging questions, but it doesn't answer all of them. It's still a flawed ending. I loved the idea, it just needed to answer ALL the questions and not just some of them. I don't want to give it away (it is the highlight of the film), but it left me with more questions than it answered. Particularly with what was the Reeker anyway?

It's a fun low budget and fairly clever film, it just doesn't quite have the slick writing or execution it needed to jump it up into the 'impressive' category. It was fun and a solid way to waste a late night on the couch, but after it was done I craved for it to be so much more. Now let's see how it's sequel/prequel holds up.

Written By Matt Reifschneider
Posted by DarkReif at 1:00 AM