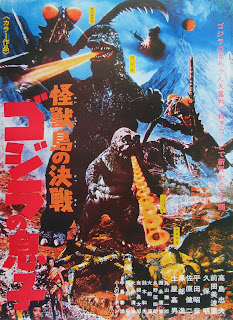 
Well they finally did it… Toho finally degenerated Big G into a full-fledged children’s super hero that fights evil to save Earth and mankind. Not saying some of the sequels before didn’t have childish elements but here they lay it on thick form the get go pandering it to the 10 year old kids. Due to this “Son of Godzilla” has a rather mixed reputation among the older fan base. Some are offended by Toho’s approach to the character and others find the unintentional humor uproarious; which means it’s either loved or hated thus it brings out strong emotions among fans. For me I’m torn as I did enjoy some of the unintentional laughter but overall the childish approach rubbed me the wrong way.

As one can tell from the title Big G gets a son in this entry. Who the mother is I’m not quite sure but let’s not sweat the small facts (Big G could be a hermaphrodite for all I know). A scientific team testing a weather control device on what is now dubbed ‘monster island’ discover the little fella after he gets the shit kicked out of him by some giant mantis’. Godzilla isn’t the best of fathers but he tries to teach his son the hardships of life but things get a little ugly when a giant spider wakes from its slumber and puts his son’s courage to the test. 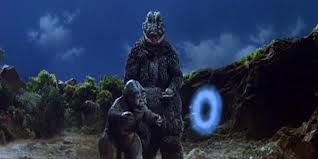 Everything about this production is light hearted and geared towards kids, even the new crummy design of the Godzilla suit. They shortened his snout to give him a less aggressive, more human face. The other monster designs are equally uninspired, most notably the look of Godzilla’s son. Fans joke he looks like the Pillsbury Dough Boy but in all reality he does, just a moldy unappetizing version. Not much creative thought went into designing the villain monsters either; a giant mantis and giant spider? That’s it? They must have took quick ‘inspiration’ from the 50s Universal flicks “Tarantula” and “The Deadly Mantis”.

I will admit that I did get a few chuckles with the interaction between Godzilla and his son who would later be called Milla. Whenever Milla doesn’t want to do something he collapses on the ground, shaking his limbs while making a squeaking sound. The best however is when Godzilla is teaching his son how to breathe fire and all his son can do is blow smoke rings, that is until Big G steps on his tail which unleashes a hellacous stream of flame.

So is “Son of the Godzilla” one of the best or worst of the franchise? Depends on who you ask because as a kids film it was entertaining enough but many die-hard fans will hate what Toho did with the character. For my personal taste it was just too childish for me to truly like thus I rarely re-view this eighth entry into the franchise. For me it was worth a few laughs but that was about it. “Son of Godzilla”, along with its predecessor “Godzilla vs. the Sea Monster”, also weren’t deemed good enough to bother with a theatrical release in the U.S. and were regulated to debut on television.

Godzilla will return in "Destroy All Monsters"

Written By Eric Reifschneider
﻿
Posted by Cronosmantas at 5:51 PM