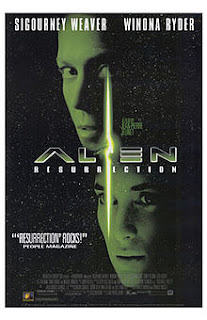 Let me stand firmly in the middle here and say that "Alien Resurrection" is just a good film. It's fun, has some solid humor, and it's entirely easy to enjoy and appreciate for its quirkiness and action. That being said, it's also my least favorite of the "Alien" franchise (if you don't count the theatrical version of "Alien 3") and lacks some certain elements that made the series great to begin with. An entirely entertaining film that just lacks the artistic flair to make it all smoothly blend together.

Ripley (Weaver) awakes 200 years after her death as a clone. Hell of a way to open a synopsis. She is under the watchful eye of a large military who has taken liberties to rebuild her so they can pull the the baby Queen Alien from her that she carried in the last film. After separating her from the Alien, they begin to breed the monster in hopes of discovering many uses from this foreign creature. Bad idea. With the help of a pirate crew, Ripley has to survive another Alien outbreak and perhaps discover that she may not be as human as she once was.

If you thought that "Alien 3" was the end of the franchise, they did kill off the 'anchor' of the series, then you owe me $10. Nothing is ever "final" in Hollywood and "Alien Resurrection" is proof of this. How do we do it? Well its science fiction so lets just clone her! Does it make sense? Not really, but whatever. In fact, there is a lot about "Alien Resurrection" that doesn't make sense. That's part of the fun of it. This film definitely takes a lighter look at the series and established a dark humor tone to the film to balance out its action sequences and horror motifs. This lends to a film full of quirky characters (Ron Perlman and the villain from "The Crow"...score!) and rather flavorful sequences that may not be all that logical, but are fun to watch and entertain you. Wanna see what an Alien looks like underwater? Why the hell not. With the visual style of the director and its fun script (that is most obviously Joss Whedon with its quirk and quips), "Alien Resurrection" certainly has its charm to it.

Yet, there is something distinctly disappointing about this fourth entry. Let's break it down into three things. Firstly, Ripley is somewhat awkward here. I'm all for franchises, but I would have been perfectly happy for them to just move on without her. Don't get me wrong, I love the character, but having her be this odd combination of Alien/Ripley who loves to make awkward moments by sniffing people or making bad jokes. It's just not the Ripley from the first three I have come to know and love. Secondly, the tone of the film is completely different. Although "3" definitely went for the atmospheric horror vibe of the original, "Resurrection" went for the action aspect of "Aliens". The difference? This one lacks any kind of tension. It's fun and entertaining to watch things blow up and Ron Perlman spout off obscenities, but there is never that dire need to survive here. No epic dread that encapsulates the plot. It is what it is, take it or leave it. Lastly, the final act. Throughout the film they dabble with the DNA mix up on Ripley and we get to see some interesting aftermath concepts, but the end 'hybrid' Alien just is way too far out there. I'm not sure if its the design or how it seemingly comes from left field, but it didn't work for me. It gets a little out of hand and weird (with Brad Dourif doing his initial narration even more so) and it just seemed way too comic bookish.

Thusly, we are left with "Resurrection", an Alien film that is sure to entertain with its quirkiness and fun vibe, but doesn't compete on the same level as the rest of the franchise. I still enjoy the film for what it is, but comparing it to the rest leaves one feeling a bit unfulfilled. Upon further reflection, this film certainly feels like a transitional film for the series, looking to start it off in a new direction. Yet, it was the last one (thus far) of this franchise. A shame to end it on this note really. Not a bad film. Not a great film. Just a straight up old fashioned good one.

Written By Matt Reifschneider
Posted by DarkReif at 12:41 AM