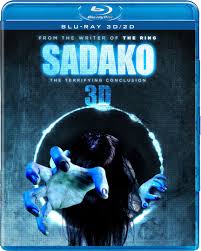 While "Ringu" it's American remake "The Ring" kick started a world wide fascination with J-Horror and Japanese ghost films, the series took a quick dive into oddities and obscurities with its eventual sequels. Now I haven't read the books that this series is based on, but judging from synopses and reviews - they equally go towards being odd and obscure. Thusly, when it was announced that our favorite long black haired villainous girl Sadako would be returning to the big screen based on the novel "S", I was more intrigued than excited. Would it be a return to form for the ghostly killer or would the modernization of having her kill through an internet video be completely asinine? Oddly enough, "Sadako 3D" is both.

When a video of a famous internet artist committing suicide goes viral, a teacher (Ishihara) has to keep her students from watching the supposed "cursed video" in class. Well, at least searching for it. It would seem the video is hard to come by. Yet, a string of suicides all linked the video have become an epidemic that the police are investigating. When the teacher witnesses a long haired woman reaching through the monitor to grab one of her students, she realizes that the curse just might be real...

My expectations going into "Sadako" were pretty low. The last few "Ringu" movies left a bit to be desired, you can read reviews of them here on the site courtesy of Eric, and the new obsession with 3D films certainly didn't add to my enthusiasm. Luckily, "Sadako" isn't nearly as mediocre as the last few films and it pulls on some great plot elements to make it work. It has some decent acting in the film and director Tsutomu Hanabusa generally knows how to craft a good modern ghost story. The first half of the film is full of intriguing ideas (including how a 'wandering video' somehow appears and disappears online) and "Sadako" builds a pretty fun mystery flick that almost has some artistic touches to it. Even the latter half of the movie, as it careens into full on horror - almost a monster flick in the third act which doesn't sit so well - the film does keep your attention as you wonder just how Sadako has come back and what she wants with our lead character.

Unfortunately, the film also succumbs to a few elements that halt it from being as scary or as good as it could have been. Firstly, the film has terrible CGI. With a focus on 3D scares, it loves to throw things like CGI glass shards or an oddly green screened falling person at the audience and the visual effects do not impress. In fact, even the rather substandard special effects seem like a breath of relief as the film starts to throw far too much cheesy 'scares' and CGI elements into the audience. When the Sadako monsters show up in the last act (I know, I know - the idea is silly but it does provide some much needed energy and it works in several spots), the physical effects are much better than the visual ones and it makes one wonder why they didn't use more throughout the film.

Secondly, for all of the stronger moments in the film and specific scenes that worked for me, the film generally makes no sense at all. I love the idea behind the film with a man's viral video of suicide as an act of sacrifice to resurrect Sadako who's looking for the right time and vessel to come back the throw down with humanity, but beyond that there was a lot of massive loop holes and poor writing to be had. Characters come and go from Sadako's realm to the real world as visions (and as hostages at one point) and the ending dumbfounded me. I really had no idea why the ending actually ended Sadako's terror reign, but whatever. There is a scene in the middle of the credits that adds a bit of mystery to the film and a post credits scene that most certainly indicates this was meant to reboot the franchise, so stick around to watch those if you buy or rent the film.

Was the film as strong as "Ringu?" Absolutely not. It's muddled in it's narrative and tends to focus too much on CGI jump scares to prove as haunting as some of the previous entries. It is, however, quite a fun little J-horror film that deserves some attention from fans of the franchise. If you have seen some of the other sequels, then you know that plot holes and silly writing are something of a regular and you probably won't mind it too much here. It's a fun mystery film with some solid moments and horror fans are encouraged to at least rent the film. If you have a 3D TV, then you might as well buy it as it comes with both 2D and 3D versions which is nice considering the low price point.

You can order "Sadako 3D" at the link below to help support Blood Brothers and our friends at Well Go USA for it's June 4th release.