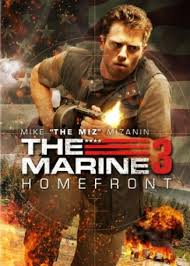 In a weird attempt to save myself from being thrown into a black hole of crappy action film mediocrity, I decided that my exposure to "The Marine" franchise would be one where I go backwards. I would start with the latest entry, "The Marine 3: Homefront", and work my way to the first just to see if, by some miracle, they actually get better as they go. This plan seems to already be working because "Marine 3" is about as generic and forgettable of an action movie as they get. No, seriously, there is not a whole lot I even remember about the movie let alone anything good to say about it. Even for B-grade action fans this one might be a pass.

Sgt Jake Carter (Mike "The Miz" Mizanin) is returning home to his small town life after being on a covert mission. He is looking for some R&R with his two sisters (Bell, Sullivan) and just getting back to normal life for a bit. Normal life is about to careen off of a cliff when his little sister witnesses a shooting by a professor turned economic terrorist Pope (McDonough) and is taken hostage. Now its up to Carter to get her out when the FBI fumbles the ball.

Never have I been a "fan" of WWE or many of its action films to start with. Nor do I even know who "The Miz" is or the weird drama that this film faced by casting him as the lead. So essentially, I was a blank slate going in - no previous experience with any element outside of some of the supporting cast. Now I know why. After watching "The Marine 3", I'm not going to remember any of them the next time they stumble into my reviewing queue.

As an action film, "The Marine 3" generally gives us the run down. Tough guy coming home and out of his element, gun fights in a cool setting (this time an an abandoned ferry - which really makes no sense but whatever), and a couple fist fights just to show off our hero's ability to throw people into breakable props. They even go as far as to make his inability to cope with regular existence as cliche as possible. Oh no, he just got in a bar fight and almost killed a guy! Well at least Nic Cage killed that bastard in "Con Air." So really there is nothing about the focus or the by the numbers directing to inspire dedication to this franchise or even this film.

Yet there is nothing really great about the rest to counter act the generic plot. It tries to act smarter then it is by having our villain (Note: I love McDonough and he's probably the bright moment in this film) be a domestic terrorist making a stand against the rich 'fat cats' who steal the money from those deserving in America. It's not a concept that's sold well enough to work. It also features a very sub standard performance from our lead hero 'The Miz.' Although I am not privy to his WWE career, the guy obviously can't act in the dramatic scenes and lacks the screen presence to sell himself to the audience like many of his cohorts do from pro-wrestling backgrounds. He sort of just sits in the role and didn't inspire me to root for him all that much. He had the action scenes down...but not much more than that.

As a bonus annoyance, "The Marine 3" looks terrible in production values. It looks like it was made straight for TV, like a Spike Original or some shit, and the digital filming makes some of the action sequences blurry and unfocused. There is a sequence with the FBI storming the abandoned ferry that looked like a rejected sequence from Fox's "24." Not good when it comes down to it and often frustrating for a even a B-action fan like myself.

More or less, "The Marine 3" was made for WWE fans looking to see another one of their stars try to make his way into mainstream film success. I sincerely doubt that this film will do it with its by-the-numbers plot and terrible execution, but you never know. For action fans, this might be one to wait for on Netflix Streaming or as a borrow from a friend. Otherwise don't worry about seeking it out or doing the impulse buy at your local Wal-Mart.