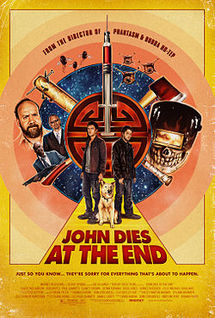 Don Coscarelli has always been a favorite here at Blood Brothers, but when he announced he would be adapting the book "John Dies At The End" into a film I was a little dumbfounded. What about "Phantasm V?" But one has to have faith, particularly when it's the director of "Phantasm" and "Bubba Ho-Tep." This faith did pay off and "John Dies At The End" ends up being one of the best comedies I've seen recently...and one generally fucked up movie that comes off as a quirky send up of "The Naked Lunch."

David (Williamson) has had an odd life thus far. He's been taking a drug called Soy Sauce that allows him to have heightened 'senses' - including senses that allow him to see/communicate through alternate dimensions, time, and combat some supernatural elements. It wasn't always like this for him and his best friend John (Mayes) so he decides the world needs to know. He plans to tell a reporter (Giamatti) the entire story of how he came to be where he is now.

"John Dies At The End" is not for everyone. Hell, I would say that it's for a very special brand of person. I previously mentioned the film "The Naked Lunch" and I stand by that comparison. Just take the illogical nature of that film's narrative and mix it with the off beat humor and super dark humor soaked violence of other Coscarelli films like "Phantasm" and you might get a general idea of what you are in store for with "John Dies At The End." Sounds awkward? You're damn right it is. For this reviewer though, the entire experience was uproariously funny and mind numbing at the same time.

To try and analyze this film with logic and cohesive thought is likely to give you an instant stroke. Normally, this is a horrible thing to say about a film. In the case of "John Dies At The End", its a damn act of genius. For whatever reason, perhaps I was just in the mood, I was able to just 'go with it.' If you don't though, expect the film to go for it without you. "John Dies" has everything one would scoff at. Inter-dimensional invasions, characters who call from beyond the grave, mysterious invisible giant insects, time travel, living drugs, bombs, car wrecks, exploding heads, possessed meat monsters, and psychic dogs. It's all wrapped up in one big bag of "WTF" that works much better than I would have ever expected.

What really makes it all flow and work is just how darkly comedic the film is. The entire ensemble cast (mostly made up of actors I am unfamiliar with sans Paul Giamatti, Clancy Brown and a cameo by Scrimm) each buy into their respective roles and ham up the emotions and reactions almost to the point where at times it felt like a spoof film. This is in turn handled with precision by Cocarelli, as we know is able to handle the humor/horror/weird like a champion, who ably adds in enough visual charm and quirky proficiency to the script to make it feel like it makes sense...even if it doesn't. The film also has impressive effects, really only showing its lower budget with some CGI work, but the awkward look and feel of our meat monster or the invisible bug add to the outrageous-ness of what the film stands for.

To be honest, "John Dies At The End" is a cult film if there ever was one. It's going to adhere die hard devotion from its fans (I already consider myself one of those) and reflect ire from those on the outside. It's one of those films that truly is 'love it or hate it' in so many ways. I am of the former, but I highly suggest throwing oneself into "John Dies At The End" to see where you land - particularly if you are a Coscarelli fan.