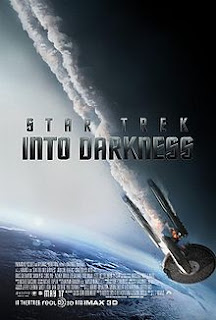 *Note: This review contains spoilers. Read if you want, but know for me to amply talk about this film - I have to spoil some of the film's "surprises."

Let me be upfront. I've been a "Star Trek" fan since I was little. Some of my earliest memories are watching "Star Trek" films and I, for one, loved JJ Abrams ridiculous reboot of the long time franchise. It kept the spirit of the original series, maximized the action for newer audiences, and still somehow balanced characters and science fiction into the film. The long awaited sequel "Star Trek Into Darkness," does not quite find that same concoction of making it all work. The film is, indeed, quite the action film, but too often it lacks the 'darkness' and 'freshness' that it needed to be as good as the original.

Capt. Kirk (Pine) and Spock (Quinto) come to a disagreement when the captain breaks the Prime Directive on a foreign planet to save his First Officer's life. This argument becomes quite the case for Starfleet and Kirk finds himself demoted on his starship Enterprise. When a terrorist act by a top agent John Harrison (Cumberbatch) kills a horrendous sum of civilians and leaves many of the seniority of Starfleet crippled, Admiral Marcus (Weller) sends Kirk and the Enterprise an a military mission to find the villain. Not all is what it seems though and Kirk will have to make some sacrifices to finish his mission. 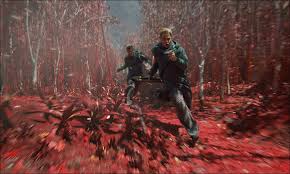 With a title like "Star Trek Into Darkness" (if anyone bitches about it not having a colon, I will find you and headbutt you into unconsciousness - who gives a shit?) and the epic looking trailers with an Enterprise cascading down to Earth and the icy stare of Cumberbatch, I was stoked for this film. It looked to really delve into some dark matter that made some of the original "Star Trek" films as good as they were. Here's looking at you "Part VI." Yet, as I walked away from the theater and the the multi-million dollar credits rolled - I couldn't help but feel a bit cheated. What darkness? Where was the epic nature promised by the title and trailer? 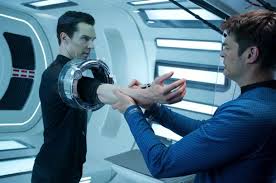 But let us start with what the film does well, which is action. Damn if JJ Abrams doesn't know how to do action like a champion. Even if the introduction seems a bit cheesy with its colorful trees and over the top erupting volcano (this sequence was an obvious throwback to the style of the TV show with its goofy moments) the film is in full warp drive when it comes to action and pacing. The film almost never breaks as it piles on plot and action for the audiences and I was entertained as hell with the film. Klingon war party? What the hell, let's have a gun fight with them! Giant ass war geared Starship called the USS Vengeance? That travels faster than warp speed? It seems a bit over the top, but fuck it - that's awesome. As a popcorn flick, "Star Trek Into Darkness" delivers.

That's just the problem though. A great "Star Trek" film doesn't just deliver fun action. It has great characters, silly but thoughtful political/moral commentary, and plenty of science fiction moments to deliver. "Star Trek Into Darkness" only delivers on some of these. Not all of them. 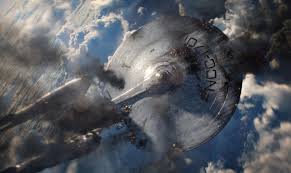 As it turns out for a science fiction film, "Star Trek Into Darkness" was far more action then science fiction and it's littered with the same lightheartedness that made the film so much fun. Except this time around, the film rarely finds the balance of character work and plot that made "Star Trek" so effective. Half the time I felt the film thought it was much smarter than it was with its half explained political war subplots and ill explained plot devices. Here come the spoilers folks, but it's quite obvious that this film takes a lot of elements from "Star Trek II: The Wrath Of Khan" and unfortunately is unable to top it in any way.

To make matters worse, all of this plot that thrust at us takes away from the one key element that always makes a "Star Trek" film so awesome: the characters. Granted I appreciate the fact that Scotty gets a slightly bigger role and the spatting bro-mance between Kirk and Spock is as spot on as ever, but the rest of the crew and cast sort of get the shaft. Sulu, Chekov, and Bones all sort of get thrown in as almost limited cameos with little in the way of character work - and the new girl, Marcus is essentially a plot device and nothing more. Even the fan infuriating romance between Spock and Uhura seems negated to being a comedic element rather than something expanded upon. It's rather frustrating for the fan in me.

If there was anything that saves this film when it comes to character writing, it's the unique way that they go about delivering use the villains of the film. That's right. Villain...s. With an 's.' While the media focused down Cumberbatch as this ultimate baddie, which I will admit delivers some awesome moments, the appearance of a war bound Peter Weller as an Admiral covering up his tracks is pretty enticing. Weller has always been a man with a demanding screen presence and his owns his role here.

This in turn, brings me to the most controversial and largest spoiler of this review. Khan. It's revealed in the film that Cumberbatch's Harrison is actually a young Khan out to tear shit up. Now far be it for me to criticize the use of Khan here, in fact, I quite like how they go about making him an anti-hero for a good portion of the film, but the finale with Khan seems a bit tacked on. I actually would have liked for the film to end before the final act where Spock and Uhura somehow overpower him (when he previously destroyed an entire Klingon kill squad and took a vicious beating from Kirk with little to no reaction) and everyone good wins. Where the hell is the darkness in that?!

Perhaps my severe reaction to the film comes from holding it in such high regard. The first one was a stunningly effective effort with a fantastic cast and wonderful director. This one is just...a disappointment. It lacks the epic scope and darkness that was indicated from day one and many of the classic "Star Trek" elements are surprisingly missing. It definitely has it's moments here and there including some stunning action sequences...but I just can't shake my disappointment. Perhaps others will be willing to overlook the elements I found distracting, but I found "Star Trek Into Darkness" to be just slightly better than mediocre. A definite step down.