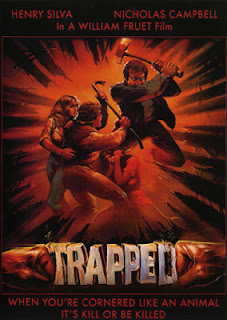 After seeing the rad trailer for “Trapped” on the Code Red DVD for “Rituals”, I had to hunt down this glorious looking early 80’s hicksploitation flick for one reason and one reason alone… Henry Silva. Since the DVD was out-of-print it took a while to hunt down a copy for a reasonable price but since I’m here reviewing the film it’s obvious I did. So is the final results of this seldom seen early 80s backwoods suspense thriller as good as the trailer made it out to be? Well no but films of this nature rarely are… but it is still a nice slice of hicksploitation cinema. 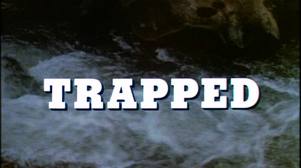 Henry Silva is a psychotic backwoods hick who blows his top when he catches his hot young blonde wife in bed with another man. Him and the other townspeople tar and feather the poor bastard before killing him. The problem is a group of four young adults from the local college witness the murder and soon after telling the corrupt local sheriff, the group find themselves ‘trapped’ and at the mercy of this lunatic hell-bent on covering up the murder.

An impressive array of Canadian genre filmmakers are responsible for this entertaining drive-in picture including director William Fruet of “Death Weekend”, screenwriter John Beaird  of “My Bloody Valentine” and veteran David Cronenberg photographer Mark Irwin. However this triumvirate isn’t what makes this film a must see. That man is Henry Fucking Silva, whom cult fans may recognize from American A-grade films “Sharkey’s Machine” and “Code of Silence” and his numerous Italian genre offerings like “The Italian Connection”, “The Boss” and “Almost Human”. This guy is one of the end-all character actors when it comes to villains and he pumps up the volume on making his character beyond psychotic, even driving his his pickup truck THROUGH the town store to run down one of the witnesses. He more than makes up for our rather bland protagonists, one that even goes as far to tell his professor that he sees no reason to ever to take a human life... which he will obviously learn the hard way. 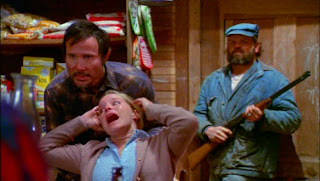 Overall “Trapped” is a pretty average backwoods thriller in the mold of “Deliverance” with our protagonists making stupid and insane decisions (why oh why the hell would they go back up in the mountains after witnessing the murders?) but what makes it raise a hair above is the insane performance by Henry Silva. His name alone makes this film worth the hunt for owning and the good stunt work and backwoods care chases are sure to entertain as well.

Written By Eric Reifschneider﻿
Posted by Cronosmantas at 8:56 PM