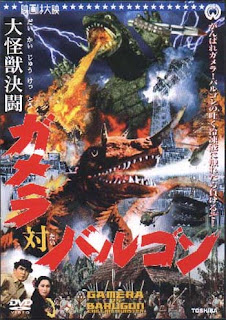 Aka "War of the Monsters", "Gamera Strikes Again", "The Great Monster Duel: Gamera vs. Barugon"

With the success of “Gamera: The Giant Monster” it was only fitting to follow the “Godzilla” suite by having our mammoth saber-toothed turtle fight another colossal monster for this sequel. Unlike the many sequels to Godzilla, “Gamera vs. Barugon” actually outdoes the original by marginally being a better and more entertaining film due to an overall larger scope to the project and for having our loveable rocket limbed tortoise appearing in color for the first time.

While being blasted to Mars, Gamera’s prison ship gets struck by an asteroid freeing his ass. He then turns back to earth and destroys a water dam in frustration. Jump to a group of men traveling to a remote pacific island in order to look for a legendary highly valuable opal in a cave. After double-crossing his partners, a man unwittingly leaves the so-called opal under a heat lamp where it hatches into Barugon, a giant ice breathing monster that has the ability to shoot rainbows out it’s back (you read that right). Can Japan trust Gamera, once villain of the human race, to defeat this bastard?

The addition of the antagonistic monster Barugon really adds to the whole larger scale of the project even if the name and look are just a knock-off the “Godzilla” monster Baragon from “Frankenstein Conquers the World”. The audience even gets graced with some unintentional laughter with Barugon’s ability to shoot ‘killer rainbows’.. talk about a killer ‘care bar stare’. I have also come to the conclusion that Barugon is a girl as it is drawn by the luster of a 1000 caret diamond and only a woman would be that attracted to a piece of jewlry. It is toyed with this entry that Gamera is becoming a ‘good guy’ but it isn’t full-fledged yet making Gamera more of an antihero, a character that seems it could turn on the human race any chance it gets before, while, or defeating Barugon.

What I appreciate about this sequel is that it is an adult orientated entry in the franchise. As the original run of the series moves on, it panders more to children with even children being the main characters. Not here my friend as it is adults all the way. This more adult approach, the addition of a fun antagonistic monster (even if it does shoot pussy rainbows out it’s back), an antihero Gamera and being filmed in glorious color makes this arguably the best entry into the initial run of the “Gamera” franchise. It wouldn't take long as the series would quickly drop in quality after this enjoyable sequel.