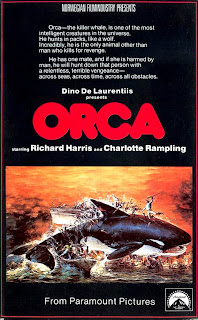 I have reviewed a variety of “Jaws” rip-offs here on Blood Brothers but most had the link of being low budget independent films jumping on the killer ocean monster band-wagon. This is where “Orca” differs as it is a big budget studio film taking a big bite out of the chum filled “Jaws” pie by being financed by Universal rival Paramount and big time producer mogul Dino De Laurentiis. The final results are mixed but overall this has to be the best of the “Jaws” clones to emerge from the great white’s wake.
“Orca” has a grizzled fisherman (Harris) having trouble paying off the mortgage on his boat and decides to attempt to capture a killer whale to sell to an aquarium. In the process he wounds a male and kills its mate which gruesomely gives birth to a miscarried calf on the deck of his ship. Thanks to numerous ‘educational’ sessions shown in the film about orcas, we, the audiences, have learned that orcas have intelligence comparative to humans and that they are vengeful creatures. This unintentional killing of the male orca’s mate sets up the rest of the film which has the male following Harris, killing various crew members, to coax him back out to sea for a final confrontation.
There is no question that “Orca” was made to capitalize on the “Jaws” phenomenon occurring at the time but unlike its other low budget clones, “Orca” doesn’t always follow the same pattern set up by “Jaws”. Sure it has a man-killing sea creature luring a fisherman out to sea but what makes “Orca” different is the whale displays reasoning and intelligence in its actions. In “Jaws” the shark shows up and kills mindlessly, including its clones that substitute other creatures in the shark’s place like “Tentacles”, “Piranha” and even “Grizzly”. Here it has motivation for its actions and even can garner some sympathy from the audience. This however is where the film gets itself into some trouble.
The film gets a little cheesy, even dipping a little into camp territory, when the filmmakers try to build up sympathy for the Orca. Scenes of it and its family swimming around to a marvelous score by Ennio Morricone seems to be trying just a little too hard and sequences showing how terrifying and cunning it is just comes off unintentionally funny. The weak storyline of a male getting vengeance on the death of its mate is workable but there are just too many sequences that become amusing and loads of aquarium stock footage does get annoying.
Richard Harris is just marvelous here playing the surprisingly complex Nolan. One would expect him to be a one-dimensional “Captain Ahab” type but he makes emotional decisions one wouldn’t always expect. Charlotte Rampling plays a sexy intellection professor type oceanologist that has an equally complex relationship with our captain, hovering between love and hate, as she tries to help him along on his quest. Bo Dereck on the other hand is just pure eye candy, nothing more and nothing less, and does exactly what she was hired for which is to look pretty for the camera and act helpless in the shadow of looming death.
The best part of Orca isn’t the cast nor the title character (though the animatronic special effects are good) but the mournfully gorgeous Ennio Morricone score and the rich cinematography. I seriously wanted to go buy the soundtrack after first seeing the picture and is on par for being Morricone’s best scores of all time.
Overall “Orca” left with mixed emotions on the final product once the credits rolled. I respected the film for not completely following the “Jaws” plot mold and I dug the attempted effort to build up motive and sympathy for the title creature but too many moments plummet the film into unintentional amusement to respect the film as a whole. The complex characters, haunting score and beautiful photography due make some of the more silly moments easier to swallow and it’s a revenge story with an animal in the lead, which is extremely rare in live action films. Come to think of it I can’t think of another one off the top of my head until Universal stole the idea for the laughable sequel "Jaws: The Revenge".

Written By Eric Reifschneider
Posted by Cronosmantas at 9:01 PM

Email ThisBlogThis!Share to TwitterShare to FacebookShare to Pinterest
Labels: Horror, Jumping The Shark