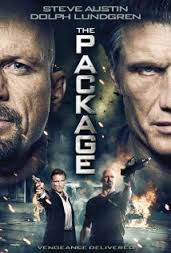 Now that "The Expendables" and the "Fast & Furious" franchises have kick started this trend of pairing or teaming up a slew of action stars together, even the lower budget films have been running with this idea. I was intrigued by the idea of having Steve Austin and Dolph Lundgren duke it out for "The Package" as one caters to a younger audience and the other to an older, but I kept my expectations low due to its rather low budget and straight to home video release. Fortunately, the film came out as far more competent than I expected - even if its still not great overall.

Tommy (Austin) has been working has a hired hitter for a local crime lord to earn some extra cash for his 'specific skill set.' When he is specifically chosen to deliver a small package to a rival crime lord only known as The German (Lundgren), Tommy finds himself being chased by killers, thugs, and assassins. What could this package be and why does everyone seem to want to kill for it?

Obviously the appeal of this film is the head to head showdown and/or partnership of our two leading action heroes. "The Package" does end up being more about Steve Austin's character than Lundgren's villain though. While Lundgren does eat up a lot of the scenery as a sick crime lord with no remorse in gutting anyone (while making smoothies and describing whey they're healthy in one scene), the film very much sticks with Austin as a protagonist to drive the action. While Austin is fairly strong in the action sequences, the man is a terrible, terrible actor. I just recently watched "Maximum Conviction" with him and needless to say, the man can't even deliver the occasional action one liner correctly. It's frustrating throughout this film to watch him act like a tree trunk.

Believe it or not, I actually quite enjoyed the plot of the film though. It might tend to run into a few chiche moments, like Tommy's girlfriend or the final twist about what the package exactly is, but overall it moves at a brisk pace and throws in enough action sequences to keep an action fan entertained. While some of the action might not make sense, for example, why do the men keep working with their construction equipment at night while multiple men are duking it out in the ally, but its fairly strong anyway and keeps the film moving. The film has some solid moments of plot structure that kicked up a notch, including a very interesting dynamic between Tommy and his boss that had me intrigued, and that really makes a difference in the end.

While I wouldn't consider "The Package" a great film overall, it does succeed on a few levels that surprised me. It has some pretty strong fight choreography, some solid plot elements, and Lundgren once again steals the film when he's on screen. It's too bad the final fight wasn't all that great, but it's take it or leave it. "The Package" will entertain action fans, even if it doesn't blow them away.