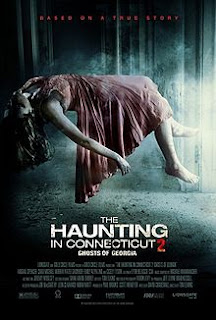 To be honest, I really had no expectations at all for this film. Why? Oh let me list my reasons. 1) It's a sequel to one of the crappiest horror movies I've seen. 2) It's a completely unrelated sequel that only shares a title. 3) The film ended up going straight to DVD in my area. 4) It looked like another hum drum ghost film. Seriously, from all of these reasons "Ghost Of Georgia" should be TERRIBLE. Luckily, "Ghosts Of Georgia" actually comes out stronger than it's predecessor in many ways - even if it's still a rather by the numbers far too modern ghost film.

When a new family moves into a cheap home down in Georgia, the young daughter (Lind) begins to see strange figures of people on the property. As it turns out, both her mother (Spencer) and her aunt (Joyce), who is living with them temporarily, have the ability to see the dead. What the daughter uncovers is a hidden secret about the property and its use with the underground railroad...and the ghosts may or may not be there to use her for their own devices.

When I received "Ghosts Of Georgia" in my Netflix, I wasn't looking forward to watching it. To be honest, I almost mailed the DVD back without watching it. So when I popped in the film, I was surprised at how much I was enjoying the entire concept. The setting, very loosely based on real events, created some great ideas and moments that made this better than the rehash plot of its previous entry. The acting was decent enough to get by and there were some fun twists and turns in the end that kept my attention. For that, I have to give "Ghosts Of Georgia" some credit.

Unfortunately, the ways that the film goes about being a ghost flick were about as cliche as possible. The plot progressions occasionally didn't make sense (I wasn't sure why the ghosts would show up in the women's visions only at certain times and not all the time...) and the directing from Tom Elkins slathered on that modern ghost style so thick that half of the time I wasn't sure if the blurry imagery was relevant or just random clips of shit for atmosphere. This style was pretty damn annoying throughout the film. Modern film making sometimes fails to realize that a good long shot with a well timed edit is more effective than quick edits and jostled pacing. No offense to this new style, but these film makers need to watch more James Wan and see how he does it and why he's the best ghost film director on the scene right now.

Due to much of this modern style, the film does lose a lot of its 'scariness.' The film has quite an intriguing villain (with a pretty slick design to have a burlap sack over his head), who is not used enough by any means, and the idea of these ghosts manipulating the family where the father is unable to see anything has great potential, but the execution lacks thoughtfulness to utilize it. It has some solid enough performances and a strong setting and idea, but the actual scares, plot, and execution leave a lot to be desired. At least it's still better than the first entry.


Posted by DarkReif
Email ThisBlogThis!Share to TwitterShare to FacebookShare to Pinterest
Labels: Horror