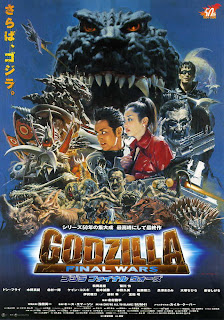 
To celebrate the 50th anniversary of Big G Toho decided to bring the series to an end... at least for now. And for this monumental final outing of an impressive 28 film long series Toho promised to go all out to make a huge brawl including tons of monsters ranging from all different eras of the “Godzilla” franchise. Fans had been clamoring for a reworking of “Destroy All Monsters” for years and it seemed fitting to end the franchise with a big battle royale… but the overall product left fans divided with the final results, including myself.

The plot here is a reboot…. AGAIN! The film opens with a mighty battle with Godzilla in the South Pole were an Atragon supersub is able to trap Big G in some ice. A few years later an alien race visits Earth warning a planet called Gorath is on a collision course with Earth and that they have the technology to stop it. Knowing this is a Godzilla film we know these aliens are up to no good and soon they unleash monsters upon the world. To save the human race from extinction, the Japanese government with the help of ‘sergeant slaughter’ and a mutant human release Godzilla from his icy tomb to rip the monsters to shreds.

Fans are going to love all the plethora of references to previous “Godzilla” and “Toho Universe” films. Hell the opening credits just gives one goosebumps as it shows clips from even more obscure films as “Varan the Unbelievable” and “Space Ameoba”. Bringing in the supersub “Atragon” from the film with the same name was just brilliant and even the reference to the 1962 Toho oddity “Gorath” brought a smile to my face. The reference that got me to smile the most though wasn’t even a Toho monster, but “Gamera”, the rival franchise of “Godzilla”, in which a kid playing with Godzilla toys throws a monster turtle action figure into the fireplace. Take that Gamera!

Well enough about references, most are probably wondering what monsters they brought back. Main staples of the franchise like Mothra, Rodan, King Ghidorah and Anguirus all make their necessary appearances. Along with them we also get more obscure ones such as Ebirah (the lobster from “Godzilla vs. the Sea Monster”), the spider and mantis from “Son of Godzilla”, Manda from “Atragon”, the worthless King Ceasar from the original “Godzilla vs. MechaGodzilla” and even Godizlla from the 1998 Ameican remake makes a small cameo (refered to as Zilla as he’s not worth of the word “God”). However, my favorite monster, Gigan, is an absolute showstopper the updates the filmmakers made to him are astounding (love the new saw blade arms!). Some were disappointed by the lack of MechaG but we got our fill of him and the last 2 entries and there’s enough shit going on in the plot that the film doesn’t need him.

The serious problem I have with the picture is the convoluted plot and continuity with the rest of the franchise. I know what you’re thinking – “plot was never important in Godzilla films” but God damnit when it’s the final film of a 28 film long franchise it better be fucking epic! The problem is that all the entries (for the most part) in the millennium era of the franchise rebooted the storyline and ignored all previous films before excluding the 1954 original. That means there was no build-up to a climatic final film through-out the series. It’s like if each “Lord of the Rings” film was a separate entity that ignored the previous entry, this would make a climatic final film moot from any built-up excitement for a resolution. Mix that with a plot full of mutant humans, flying subs, aliens, giant monsters and a lifeless subplot about Godzilla’s son makes one’s head want to explode!

Another issue some fans was the style and overall look of the film. Director Ryûhei Kitamura goes out of his way to make this look like an almost over stylized, Hollywood action picture with his camera work and lighting. I had no problem with this as it differentiates it from the look of previous “Godzilla” pictures. He also loads up the film with mutant human martial arts fighting. Usually “Godzilla” films are full of monsters fighting and humans talking so I see no problem with the addition of martial arts. I do have to agree with some fans as there is so much shit going on in the script that Godzilla almost seems like an afterthought and doesn’t show back up in the film until over an hour into the picture… but it is grand when he does.

Overall I enjoyed “Godzilla: Final Wars” but like many fans I had issues with the final results. The style and martial arts addition didn’t bother me but the convoluted plot and lack of continuity to the rest of the films made it lack the climatic resolution one would hope for. The overall result of the plot is sadly ‘just another “Godzilla” movie’ instead of being an epic finale. With that said I still had a ball with all the monsters from “Toho Universe” and seeing Big G stomp the shit out of Tokyo one last time. With this review it brings the end of my four month long “Godzilla Tokyo Stompathon” of reviewing every “Godzilla” film and many entries into the “Toho Universe” of monsters. I wish there was another giant Japanese monster series I could review… like a rival franchise that gave Big G a run for his money at the box office… like one featuring a giant saber-toothed space turtle. That’s right… “Gamera Tokyo Stompathon” is just around the corner beeches!

Written By Eric Reifschneider
Posted by Cronosmantas at 6:14 PM