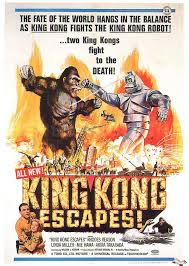 
Toho spent a pretty penny to license the character of King Kong for their monster brawl epic “King King vs. Godzilla”, so much in fact that it would just be foolish to only use the character for one measly film. Toying with giving Kong his own film for a while in the “Toho Universe” of monster movies (even replacing Kong with Godzilla in “Godzilla vs. the Sea Monster” for a more marketable value), Toho finally gave in when American producers Rankin/Bass approached them to due a live action tie-in to their cartoon series “King Kong” which was popular at the time. To fans dismay this means this is NOT a follow-up to “King King vs. Godzilla” despite the same production company and director. However don’t let lack of connection to that film get one down as this is still one monstrously entertaining ‘guy-in-a-suit’ Japanese flick.

An evil genius has built a giant “MechaKong” in order to dig for a deadly and highly valuble new element buried under some ice in the South Pole. The radiation from the element however fries MechaKong’s circuits so our evil villain hell-bent on world domination travels to a remote tropical island to kidnap the real Kong to retrieve the element and MechaKong. We all know what this will lead up to… a monster brawl in Tokyo!

The monster suit is the same one utilized in “King Kong vs. Godzilla”, which means it looks like absolute ass and has a bad case of mange but that’s all in good fun for Kaiju fans. Fans will be delighted with a few references to the original 1933 film “King Kong” which includes a fight scene mimicking Kong ripping a dinosarus jaw apart and our big ape falling for a cutie Navy nurse that always seems to scream and trip at the most inopportune moments. Our evil genius mimicking a Bond villain is a hoot (especially when he bragging about how superior his MechaKong is compared to the real Kong) and the idea of “MechaKong” is major badass and beat the idea of MechaGodzilla by 7 years.

It may not be a follow-up to “King Kong vs. Godzilla” (though Gorosaurus would reappear in the “Godzilla” entry “Destroy All Monsters”) but don’t let that stop anyone from owning this entertaining Japanese monster romp. It has all the ingredients of the monster films in the “Toho Universe” and fights perfectly next to anyone’s “Godzilla” collection on their DVD shelves. Sadly this would be the last time Kong would appear in a Toho monster film which is damn shame as it would have been amazing to see him in the giant monster battle royale “Godzilla entry “Destroy All Monsters”.