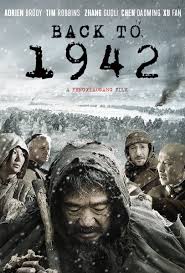 Normally, I am not one for war films. Most of them tend to be great films, but as films - rarely do anything for me beyond pull at heart strings and rehash many of the same ideas. That's what made my experience with "Back To 1942" such a unique viewing. Yes, it's a dramatic film that takes place during World War II as the Japanese invaded China. Yet it wasn't a typical war film. Rarely were there any "bad guys" or "good guys" in the film, there were very few cliches outside of stylistic choices, and the few 'action' set pieces were meant to be horrific and not intense in the usual American style of the thought. "Back To 1942" was a film dedicated to showcasing the struggles and desperation that war creates on civilians - particularly those under duress - and it succeeds in such a grand way that I was emotionally drained as the credits rolled. "Back To 1942" is a cinematic wonder in many ways and it redefines 'the war film' for a new generation of film seekers.

Master Fan (Zhang Guoli) has struggled to keep his village a float when a massive famine strikes the Henan province in 1942. To make matters worse, his home is ransacked by pillagers and burned to the ground so that he, his family, his friends, and his fellow people have to trek across China to reach a far city in hopes of finding food and shelter. Fighting off starvation, bandits, and an impending war Master Fan must fight to keep his family alive even in the harshest circumstances. 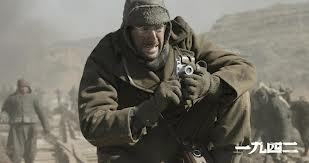 There are two words that kept swirling around in my head as "Back To 1942" played out: impactful and heart breaking. Very rarely do we glimpse into this side of a war film and Feng Xiaogang's epic telling of a family's struggle to just eat is eye opening and breath taking in its human drama. It leaves a film that is pretty unique as it rarely portrays any one as a 'good guy' or 'bad guy' as it dabbles in the gray areas of war and how its fought. A government scarce on resources and afraid to lose the war by helping its people. An invading army's tactics to use famine as a way to turn a country's people to their side. Even a priest whose faith is shaken by trek. Granted, there is a lot going on here with perhaps far too much as it wants to dabble in a lot of different aspects of the journey and its effect on people in a lot of supporting plot lines, but the effect is a dazzling and immersive experience guaranteed to shake you to the core.

This attention to the impact is established with strong performances and execution all around. Director Feng Xiaogang piles on a thick a dreary atmosphere that defined with stunning artistic design (although it lacks the glitz that usually gets praise for costume design, the look of the costuming is brilliant and effective here) and some stunningly powerful moments where his actors and actresses can truly strut their strongest performances. It's not the most grand in how it goes about its vision, the bombings by Japanese fighter planes seem to be some of the bigger sequences, but its those moments partnered with a sequence where the priest struggles to stop a child's bleeding stomach with his Bible is where it works best. 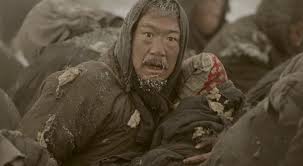 To be honest, "Back To 1942" is a film that must be experienced. I can write about all of the great moments and strong performances for days on end, but none of it will ever match the true force that this film accomplishes in viewing. It's unique in its approach to being a 'war film' and the execution is all top notch. It might meander a bit too much from the true heart of the film's worth in the refugee family, but even that seems to impress. Easily one of the most heart breaking films I have ever seen and one that will effect me for years down the road. It comes with only the highest recommendation.