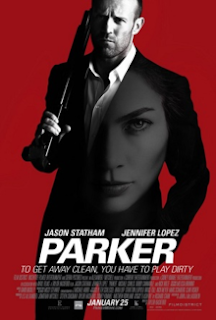 As part of our ongoing series "Jason Statham: The Never-Ending Five O'Clock Shadow," it was necessary for me to finally watch "Parker." There are multiple reasons why I wanted to see this film. It has the ever awesome ass kicking Statham in it. It's an 'R' rated action film. It's based on the same novel series as the cult favorite "Payback." SOLD! Too bad "Parker" can't live up to ANY of the previous reasons. In fact, it's quite the antithesis of what I expected from the film. It's much more comedic, bright, and bouncy than I would have ever expected a Statham led "R" rated "Parker" film to be. It has a few moments, but overall it's quite the let down.

Parker (Statham) has a decent thing going. In an almost Robin Hood like fashion, he's a thief of money from those undeserving and generous with it once he swipes it. After a botched heist on a State Fair, Parker is left for dead by his comrades when he won't give up his share for them to do a second heist. Now he's out for vengeance, to get his cut of the job, and to deliver the pain to those who left him for dead. Unfortunately to do that, he might have to take on a realtor (Lopez) to help him with the lay of the land.

For a Statham vehicle, I was shocked at how poorly this film portrayed him as the bad ass we all know him to be. Let's be honest, he doesn't play the most vulnerable kind of anti-hero nor is he all that good at playing a thoughtful crook who cares for people. We see hints of that in some of his other films, a bit here and there in the "Transporter" series perhaps, but "Parker" wants us to buy into this idea very much so...and completely blows it with a terrible character arc. Early on we have a scene with him helping out a hostage from panicking and doing something stupid. The scene is supposed to be heartfelt and show us a side of this anti-hero for us to like. It comes off as forced and silly - particularly when it comes to him setting out for revenge against those who left him for dead. Should we be rooting for him to kill them all or should we be waiting for him to to turn the other cheek and just call it a day? Half the time "Parker" doesn't know either and we end up with a wishy washy hero that fails to intrigue. Not to mention seeing Statham as a priest and then a Texan oil baron (complete with terrible accent) in disguise has to be one of the saddest things I've seen on film all year. It's B-action film gold if your mood is right.

Even beyond a lead character who rarely lives up the kick ass nature he has in other films, "Parker" is a film that fails to live up to it's own premise. For an "R" rated flick, the violence and indulgences of it's allotted extremes seems a bit tame. Granted the entire feel of the film is much more upbeat and silly than I expected even throwing in some humor here and there, but even then the film seems to play it down. The violence is occasionally brutal, including the highlight hotel room assassination attempt that has Statham push a knife through his own hand, but beyond that and an occasional 'F' bomb rarely did this feel like a rated 'R' flick. Hell, even "The Last Stand" (which was released at roughly the same time) is more hardcore than this and it has Johnny Knoxville as a sidekick.

Rarely did I feel like "Parker" was a terrible film, but it was certainly a dud compared to the expectations I had of it. The film rarely delved into the darker subject matter its plot wanted to go to, the lead character was confused and often wishy washy outside of a standard Statham performance, and the action was second fiddle to the the over emphasized plot. There was one sequence, the hotel fight in the middle of the film, that felt like a good time for the film to turn into the "Parker" I wanted, yet it ended up being a lone highlight in a mediocre and generic action film. By far Statham's weakest film to date. A sheer disappointment.