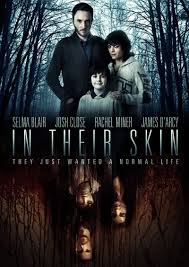 Home invasion films are getting to be a dime a dozen these days, whether it be more of a thriller or horror style, and by now it's getting harder to impress me. Had I seen "In Their Skin" even five years ago I would have thought it daring and tense. At this point, the film struck me as sluggish with a small portion of 'trying too hard' to go with it. The home invasion genre is just a little over-saturated with run of the mill features and "In Their Skin" comes off as simply one of the pack.

Mark (Close) and Mary (Blair) are struggling with their marriage. The untimely death of their young daughter has taken its toll on the whole family, so the couple and their young son head up to a family cabin to reconnect. The odd neighbor family seems to be a little too friendly when they arrive. A little too inquisitive. A little too forceful....

"In Their Skin" does have a couple of things going for it when it comes to strong film making aspects. Firstly, the acting is tremendous. There is a palpable awkward and dread filled atmosphere that the actors bring to the table throughout the film and the chemistry that they have with each other carries "In Their Skin" much further than the script does. Sans the two young boys who struggle compared to the adults, the acting is of remarkably high quality here - both protagonist and antagonist alike.

Secondly, "In Their Skin" has great atmosphere. The initial build, ripe with the awkward marriage issues, sets up a somber tone that only deepens as the film goes. Director Jeremy Regimbal cakes the film with a 70s aura of long static shots and lots of subtle character work (allowing the actors to do their best) and comparisons to the original "Straw Dogs" or the like could be made in this approach. Which, of course, is quite the compliment overall. Particularly from anyone who loves that older style of film making.

The problem with "In Their Skin" remains in the foundational script. Too often the film tries too hard to be disturbing. The idea of a murderous family 'stealing' your life is a very cool one, but this film tends to want to lean into some disturbing territory that seemed a bit ill fitting. While the film succeeds in unnerving the audience with creepy hints at a dinner party and a minimalist take on the background of our antagonists, when the film ratchets up the tension in the final act it wobbles. It then loses the slow burn (while still feeling quite slow) and moves towards just being straight up weird. "In Their Skin" lost me when our helpless family has the brother show up. At this point (although there are plenty of great ideas) the film just lacks logic. And then the film takes an odd turn straight towards grindhouse with an oddly transitioned sex scene, that although disturbing, is just...there. Fucked up? Absolutely. Fitting for the style of film? Not really.

So in the end "In Their Skin" is a film of fairly strong execution built on a faulty concept that meanders too much in its idea and yet remains clamped onto too many cliches. The performances are top notch and the atmosphere works, but this film could have been exponentially more impactful. This is a film mostly for those looking into more artistic home invasion films...otherwise its probably a rental at best.

Written By Matt Reifschneider
Posted by DarkReif at 11:15 AM