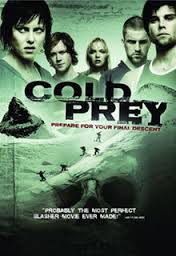 I have always been a sucker for a cold weather slasher (just look at my recent review for "Blood Runs Cold"), so when I stumbled across the Norwegian slasher "Cold Prey" I needed to jump into my snow shoes and dig in right away. Too bad this little indie horror film simply caters to the cliche and plays it far too safe...otherwise there might have been something more here instead of just another run-of-the-mill slasher.

It was supposed to be the best weekend ever. Five friends, fresh Norwegian snow, snowboarding, and getting to relax. That is until one of them accidentally breaks his leg and they are all forced to take shelter in an abandoned resort and inn. Well, a place they think is abandoned. Now they are going to find a means of escape before a cold blooded killer takes them out, one by one.

Five youthful kids trapped in an isolated cabin with a mysterious killer out to slaughter them? Welcome to slasher 101 folks and it's "Cold Prey" on the docket today. Ironically, I just reviewed a wintery slasher this same basic concept with "Blood Runs Cold" and oddly enough, despite its massively inferior budget and acting - I enjoyed that one much more.

Not that "Cold Prey" is bad by any means, it just happens to be far more mundane and by the numbers. The production values are pretty strong with some effective moments towards the end including a pretty intense finale featuring our lead heroine having to play dead on a sled full of her dead friends, but sharp set work and a solid enough cast can't make up for unoriginality of script. And it is this unoriginality that bogs this film down.

For a slasher, "Cold Prey" misses out on many of the essential elements that even the most cliche slashers need to work. In particular it's two things that make this film feel flat. Firstly, the kills are utterly predictable and rather...well, uneventful. Nothing all that unique despite a setting ripe for weird kills. A couple of vicious beat downs and not a whole lot of tension to jack up the suspense either to make the rather basic kill sequences work. It's not all that scary and the suspense of "who's next" or "how will they survive" needed to be increased heavily to make any of these moments work. "Cold Prey" also misses out on being gratuitous in any manner. Not that I'm criticizing the film for lacking gore and nudity (although I am sure many slasher fans will), but it needed to really embrace something. To really go for the gold in one aspect. It doesn't. The gore is minimal. The atmosphere starts off with potential, but falls to the wayside. Even villain seems about as basic as they get. There wasn't any cool traits to the killer beyond his bundled hulking look to make us remember (outside of the final "twist" that was so obvious it hurt) and our characters, despite some strong moments of character work, feel like they are simply dropped into the film rather than being a "part" of it.

The problem that "Cold Prey" runs into is not about how 'bad' it is, but how unmemorable and mediocre it is. I would much rather have a film be bad and laughably entertaining, then one that tries to be good and just ends up mundane. "Cold Prey" ends up being the latter. Considering they made a sequel and a prequel to this film, there must be a following that enjoyed it. I just found it disappointing.