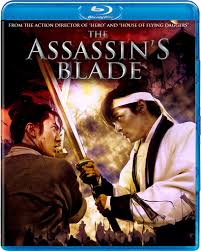 There have been thousands of renditions of the classic tale of "Romeo & Juliet." Dammit, I feel like I've seen hundreds myself. So when "The Assassin's Blade" arrived for me to review, to be honest I was a bit hesitant to take that trip again. Even as a martial arts film, I feel like the story might be overdone (even finding itself in the Americanized kung fu mediocrity that is "Romeo Must Die" at one point) and going into this film I felt like I was just going to find myself saying the same things I've said before. Yet as "The Assassin's Blade" proves, just a little thoughtfulness can make an age old tale feel fresher then it should...even if the film takes a drastic change in tone between halves.

Zhu Yanzhi (Charlene Choi) has just sent to the mountains disguised as a man to begin training at an elite martial arts school where her father (Ti Lung) has a friend who does medicine there. Once there, she begins an intriguing relationship with her mentor Liang (Chun Wu) who takes her under his wing to help her catch up on her training. When a suitor (Ge Hu) helps her family in exchange for her marriage, she finds herself in a love triangle with dangerous consequences...

Firstly, I would like to state that the film's title, "The Assassin's Blade" is about as ill fitting as possible. Yeah it will sell better with it (and definitely sell better than its more fitting title "Butterfly Lovers"), but it really, really doesn't fit the film at all. There is, indeed, some political subplot that goes on in the film - although it's horridly built and I really didn't understand how it made a difference to the main romantic plot - with a sweet assassination that occurs. "The Assassin's Blade" is far more an epic love tale of wuxia flair and one that many people are going to dislike due to its title and the expectations it creates...which is unfair to the film to be honest.

"The Assassin's Blade" is a full on romantic film. It goes about it in many different ways, including two very different halves of film tonality wise, but it's a romance through and through. The first half of the film focuses on an almost rom-comedy feel. Using the gender bending to be humorous and really focusing in on this woman who is way over her head in learning from these skilled martial artists. Yet it works because the chemistry between our two leads is explosive. The humor might be hit or miss at times and this first half is about as cliche as it gets when it comes to a romantic comedy, but their chemistry really does carry the film. Beware though, its definitely a romantic comedy here.

Then the film takes a pretty sudden and dark turn for the last half. Director/writer Jingle Ma takes a page from the director of those of "Hero" and "House Of Flying Daggers" (and steals the action director too!) and douses the second portion in artistic classic sword dueling action. This is where the film really succeeded in winning me over. The performances here might be of a more dramatic kind and our leads spend little time giving us that palpable chemistry we saw to begin with, but dammit the film is simply more enjoyable. The colors of the film are of a higher contrast to parallel the emotions of the half and Jingle Ma really throws down with thoughtful set design and great action - culminating in a pretty impressive rain soaked battle at the end which explodes into a classic sword clanging duel to a stark white backdrop. Is it quite as impressive visually as the previously mentioned films, not quite, but it's at least in the same league and I can appreciate that.

"The Assassin's Blade" is not for everyone. The split feeling of the film is a bit harsh, sometimes the film gets almost too fantastical for its own good (the poorly injected CGI butterflies that thread the film don't help), and the "Romeo & Juliet" premise is about has predictable as it gets nowadays. I did, however, quite enjoy the twists it pulls off with the foundational ideas, Jingle Ma adds some artistic visions to the finale, and the chemistry between our two leads sells the whole thing. It's not the best film out there, but it came off more surprising in quality than I expected.