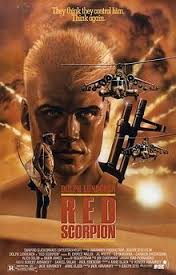 As the golden age of action film making manifested itself into the early 90s, there were a few overlooked gems that existed. Normally, as a writer that focuses on modern cult cinema, I don't get to dig out these kind of under-viewed classics, but as it would have it a beautiful new Blu Ray of "Red Scorpion" ended up in my collection and I just happened to be starting a running feature for the site about Dolph Lundgren. Thusly we start with what was supposed to be one of Dolph's big lead roles in "Red Scorpion." A film directed by Joseph Zito and starring Dolph? "Red Scorpion" is B-grade action gold even if it's a film that fell through the cracks far too much when it was initially released.

Lt. Nikolai Rachenko (Lundgren) has been chosen for a very special assignment. He is sent to infiltrate an anti-communist African rebellion to assassinate it's leader to help the Russian led government. When he discovers that the rebels are the good guys against the oppressive Russians, he fails his mission and is disgraced. Now its up to him to help these rebels fight back against the corrupt military that turned their backs on him.

It's pretty easy to see that "Red Scorpion" is 'technically' not going to be good film. For the same reasons that the film is B-grade action gold, it's going to be a film that will earn the ire from those not of a cult film taste. Even compared to other Joseph Zito films like "Invasion U.S.A.", "Red Scorpion" feels a little subdued by a hindered budget and some odd moments in the film. Other than some smaller elements, which will be talked about in a minute, "Red Scorpion" succeeds as an entertaining action flick with a larger than life hero and some fun moments. The action is pretty solid, there is a pretty impressive/explosive car chase that occurs at the the end of the first act, and Dolph keeps a larger than life feeling on screen. He delivers a few classic one liners that had me rolling on the floor and, despite his short shorts in the last half, I was loving Dolph in this role.

Now the film is far from perfect as the story comes off as a bit silly with its obvious anti-Russian/Communist themes (well, it is an American action film from 1989) and the film can be uproariously cheesy. The entire middle portion as our hero goes from being a tool of war to a man respectful of his life and its meaning drags a bit and can be a bit of a bore. Seeing Dolph learning to hunt wild pig and befriend a 'bushman' from Africa has its comedic merits and it does give him a bit of character arc without overloading him with more than 10 lines of dialogue, but it drags.

"Red Scorpion" tends to be a little overzealous in its broad stroke themes, but at least the film is entertaining as hell. It has some great bad dialogue, the film is populated with fun character actors, and the action is pretty top notch considering its limited budget. Is it going to be an action film for everyone? Nah, but if you love that old school over the top and limited brain capacity style that the 80s delivered in action then this is a must have.