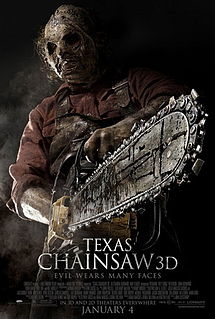 Now I'm not going to be one to call the "Texas Chainsaw Massacre" one of the best film franchises ever, in fact its been viciously hit or miss in quality, but after watching "Texas Chainsaw" I have to say that this franchise has most certainly hit a new low. Considering how terrible "The Beginning" and "The Next Generation" were, this is quite the loaded statement. There was potential in the idea of "Texas Chainsaw", but terrible writing and horrible execution of its concept make the film one of the worst slashers I've seen.

Heather (Daddario) has just received a relatively big shock. It turns out that she was adopted. It also turns out that her biological grandmother has just passed and left her an estate in Texas. This leads her, her boyfriend (Trey Songz), and a couple friends to road trip down to the estate. Unfortunately, somebody is already in the house. A large man who wears skin masks. A man with a past connected to Heather. Now if only she can live long enough to find out why they're connected...

What will perhaps confuse most people watching "Texas Chainsaw" is that it's a direct sequel to the 1974 original "Texas Chainsaw Massacre." Which does mean that, yes, it completely ignores both the original franchise sequels and the remake series. In a sense, just try to forget those exist when you watch this. Better yet, remember those exist and watch those again instead of watching this. Otherwise, if you're a franchise whore like myself, then continue on with caution.

The film itself...well, it leaves quite a bit to be desired. Both as a slasher and as a film in general. I will admit, that I actually thought the concept wasn't all that bad. The idea of a long lost family member stumbling on the family secret and having to face it with a chainsaw blazing? I can see why Lionsgate bought into it. The problem with "Texas Chainsaw" is how they go about it. All of it. This is seriously one of the poorest horror films in execution that I've seen get a theatrical release. The acting is horrendous. You know it's bad when Trey Songz as cliche of a character he plays, is one of the better actors in it and the story is down right so poorly written that anything clever that they do inject into the plot, including a third act twist that almost makes Leatherface an anti-hero, is irrelevant due to our apathy towards any of the characters or situations. Whatever good ideas or concepts they had going was lost in the poor execution and cliche slasher elements.

I will give the film two kudos which sounds odd given what I said in the paragraph previously. Firstly, the film is so bad at times, that it's awesomely hilarious. Not that it ever intended to be, but dammit I was dying of laughter at a couple moments. The "chainsaw throw/run into the woods" moment by Leatherface has to be one of the best bad horror movie moments I've ever seen. I'd be tempted to say that the Redbox rental is worth the $1.20 along for that one moment of hilarity. Secondly, I will admit that the gore was pretty solid here. Granted, there is not near enough of it to truly be awesome, but when it pops up it's worth it.

If you are a fan of the franchise, "Texas Chainsaw" will probably upset you with just how by-the-numbers and un-frightening it is. It might also upset you just for screwing with the original series and stealing a couple of beats straight from the '74 classic. For me, "Texas Chainsaw" pissed me off not because it was one of the worst slashers I've seen or that it tried to mess with a classic franchise, but because it did all of that and somehow was successful in the box office. Hopefully the upcoming sequels will learn to be better horror films and not rely so much on name recognition to sell tickets. As is, this film is a skip unless you are a franchise whore like myself.