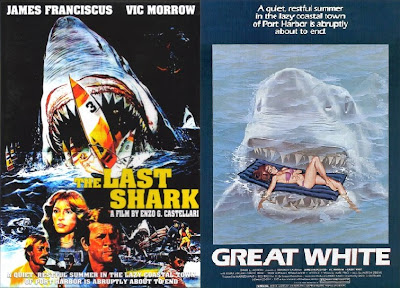 I have seen countless “Jaws” rip-offs in my time but never one that actually got BANNED due to the fact. Yes Enzo G. Castellari’s 1981 Italian horror opus “The Last Shark” got a brief one week release in the United States under the title “Great White” before being pulled from theaters thanks to Universal filling an injunction getting it banned from the United States for copyright infringement due to numerous scenes stolen, or 'copied', from their films “Jaws” and “Jaws 2”. This unwanted attention the film garnered made it a staple for every cult film fanatic to hunt down, I mean how many films actually get banned in the United States? After finally seeing the picture I can honestly say it is hands down the biggest “Jaws” clone I have ever seen… and I have seen a lot! What else should I expect for a film that actually got banned for the fact…
The plot will sound a wee bit familiar as a small coastal community has an unwelcome visitor in the form of a giant great white shark who starts to eat local swimmers and fishermen. A local writer (James Fanciscus – substituting for Roy Schieder) and fisherman (Vic Morrow – substituting for Robert Shaw) know in their gut it’s a great white but the local government officials won’t have any of it as the news of a shark would hurt the communities profits (sound familiar?). So it’s on with a a wind surfing competition (mimicking the boat race in “Jaws 2”) and predictably it becomes a blood bath and our two heroes have to head out to sea to kill the beast before it digests the entire cast.
Saying “The Last Shark” is a “Jaws” rip-off is an understatement of the century. If one would play a drinking contest and take a swig every time a scene was stolen from “Jaws” or “Jaws 2” then they would die of liver failure before the end of the picture. A mayor turning a blind eye to the situation: check, Robert Shaw-esque fish hunter: check, shark pulling around a pontoon-like floating device to mimic yellow barrels in “Jaws”: check, main character’s child being threatened by the beast: check, bombastic repetitive ‘monster is coming’ score: check, mechanical shark head popping out of the water: check. Hell Jaws even takes down a fucking helicopter ala “Jaws 2”… just not as well executed and ‘believable’. So just a kind warning – don’t play a drinking game to “The Last Shark”.
The cast is of unusual high caliber, even if it made up of fading Hollywood stars. James Fanciscus (“Beneath the Planet of the Apes”, “The Cat O’Nine Tails”) is great as always but Vic Marrow (who was later tragically killed on the set of “Twilight Zone: The Movie”), looking like a Robert Shaw clone, is a little confused, having his character change from an Irish accent to Brooklyn accent throughout the picture causing for some unintentional laughter. Many of the rest of the cast is full of seasoned Enzo G. Castellari veterans and Italian cult fanatics will had fun playing ‘spot the character actor’.
Castellari has made it clear in interviews that he was never a fan of horror films but when the Italian film market started to gear towards the horror genre in the late 70s, away from the Spaghetti Westerns and crime thrillers he was comfortable with, he had to change in order to keep a job and it’s obvious he’s not comfortable in the genre. Castellari just isn’t able to craft any real horror suspense and he shoe horns in very odd action/stunt sequences into he film more suited for his action/western pictures of the past (though surf boards exploding into the air due to a shark attack is quite humorous).
When the shark is finally revealed my wife let out a huge chuckle, but in all honesty for a low budget Italian flm the mechanical shark didn’t look all that bad. It’s just perhaps they show it TOO much ( like “Jaws: The Revenge”) and having the damn thing roar (again like “Jaws: The Revenge) is just ludicrous dipping the film into camp territory. The miniature effects do leave a lot to be desired (like many Italian films) and the destruction of the model helicopter will sure to have any cult knock-off film buff hit the floor laughing.
“The Last Shark” has the reputation of being the biggest “Jaws” rip-off of all time and it thankfully lived up to that lovely prestige stapled to its fin. Viewers will no doubt have feeling of deja view as they watch numerous scenes lifted from more popular American counterparts but there’s enough B-movie mayhem and entertainment to make this worth watching. Hey in all honesty I can say I enjoyed it more than both “Jaws III” and the lamentable “Jaws: The Revenge”. I just find it ironic that the film would be released as part of the “Jaws” franchise in various foreign countries, even being retitled as “Jaws Returns” in Japan. Take that Universal! For years more people had heard about this nortorious picture than had actually seen but thanks to a little cult label called Retrovision Entertainment finding a loop hole in the legal system, “The Last Shark” has finally been given it’s first ever official home video release in the United States for all us cult film fanatics to finally see. So throw away your crummy bootlegs and support this wonderful DVD label!