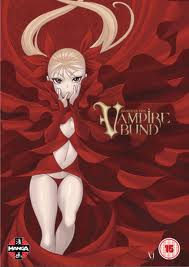 Ever watch a movie or series and you are left feeling well... indifferent about it?

This is how "Dance In The Vampire Bund" made me feel, nothing. I did not hate it or love it. I am not really sure what to think of it overall. The following sentences and paragraphs will explain.

Synopsis - Queen Mina Tepes leader of the vampire world is hell bent on forcing society to accept vampires into the human world. However she faces an uphill battle against many foes including some of her own kind.

Review - My thoughts on the series are this, the anime had no clear direction from the start. Is it horror, romance, or maybe we want to get the young male audience with some odd "Lolita" fan service? This is mainly where it became uncomfortable for me. The Queen is a child vampire maybe 10 yrs old in the human world, however that doesn't stop the creators from putting her in sexual situations. It was hard to watch at times. I get the fact that the series is ultimately based on Queen Mina, but it stays so focused on her that they miss out on developing any other characters. Which is too bad because there is some interesting characters to play with.

About halfway through the series I was about to give up on it and  move on. I hate that feeling, so I fought on and wouldn't you know it, the series got better for roughly 2-3 episodes. For this small story arc it focused on Mina's relationship with her werewolf servant and part time lover Akira. I, for one, really liked this side story. It gave life to a character that was dragged through the series and finally gave us the viewers something to cling on to. Although short lived this little story arc is what makes my feelings twist about this series. In the end, I decided I needed more from this anime. Is there gonna be a second season to give me closure? I am not sure, would I even watch it? This series is so dark and lacking humor of any kind. "Dance In The Vampire Bund" is a lot of things but one thing it is not is complete. Visually it is well done, with all the standard visual effects and the voice acting is good enough.

Overall I will give "Dance In The Vampire Bund":