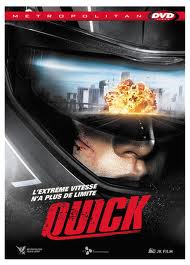 Despite the relatively crappy cover art work that graces "Quick," a handful of reviews prompted me to investigate the Korean action flick. To be honest, I kept my expectations low. I mean, South Korea has been known for some stunning thrillers and the occasionally great martial arts film, but a big special effects driven action film? I was hesitant. "Quick" ended up being both a solid surprise and a somewhat disappointing affair. Yes, the film is an entertaining leap into all out over the top action with plenty of explosions to showcase it's Michael Bay influences, but it also happens to be only half way logical in its "twists" and oddly placed humor. "Quick" is the kind of film that entertains, but doesn't stick.

Han Ki-su (Lee Min-ki) lives a simple life. After a horrific accident, he has left being the young leader of a young motorcycle gang and uses his ample bike talents as an efficient and well paid messenger. When he is paid to pick up a unique package in the form of a popular pop artist and ex-girlfriend Chun-shim (Kang Ye-won) he feels like his old life and his new one are colliding. Too bad this isn't his only worry. The helmet he gives her is hooked to an explosive device. To save her, he must deliver bombs to very specific targets with very specific instructions and time limits. It's a race against time and the authorities to save an old flame, can he do it?

"Quick" is ridiculously over the top in its concept. It also happens to be ridiculously over the top in its execution. I made a previous comparison to Michael Bay and I stick by it. Like that over rated American block buster director, "Quick" focuses on being a film of pure entertainment by any means necessary. That action that's injected into the film is of very high quality and it's hard not to say that I wasn't on the edge of my seat rooting for our hero the entire time. Whether its explosions he's racing from, dodging gas canisters rolling down the highway on his motorcycle, or a rather fun fist to cuffs encounter with the film's villain on a speeding train set to detonate - "Quick" delivers on its title even if that means sacrificing any kind of logic in the process.

As an action fanatic, I was hooked on "Quick." Unfortunately, the film, like the Michael Bay films it aspires to be, is about as deep as a kiddie pool half drained. The obvious romantic subplot created from trying to save an old flame from a rather nasty head-splosion is fun when the chemistry works, but overall their banter and the ridiculous amount of "flashbacks" used to tell a story of sacrificed love tends to fall flat. The humor falls flat too half the time (although when it works, I was digging it - like when she is trying to jump from a van on his motorcycle at high speeds in traffic) and there seemed to be far too many subplots and dropped characters that its fairly long run time felt occasionally padded. Even the villain of the film is relatively too cheesy for his own good, although I have to admit I'm okay with that, and when he shows up at the end and explains who he is there might be some forehead slapping going on.

In the end, I have to give "Quick" the benefit of the doubt here. It's mostly illogical, silly, and the character work forced - but dammit the film was entertaining as hell and that counts for something. Action fiends will find plenty to love in its over the top mannerisms and B-grade storytelling so it comes suggested for my friends in that field. Otherwise, it might be more of a rental for the rest.