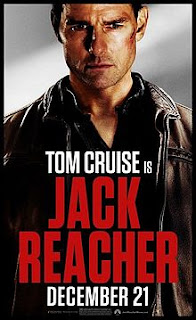 Although I am not privy to the Jack Reacher novels from Lee Child nor am I a huge crime thriller fan, "Jack Reacher" intrigued me. Firstly, it was controversial in casting of Cruise as the lead from the book fans and secondly, it's based on the ninth book of the series. An odd choice considering this would be the first time we see the heroic and Sherlock-esque Reacher on film. What I didn't expect was that, despite all of this controversy and hum-drum, "Jack Reacher" is quite the solid mystery thriller. Yeah, it tends to be a little too predictable and a bit long winded as a film, but it was enjoyable and it certainly creates a strong title character to be franchised.

After five people seem to be randomly murdered on a sidewalk in Pittsburgh, the evidence all clearly points to one man: James Barr (Sikora), an ex-military sniper. When arrested though, Barr only asks for one thing. To find Jack Reacher (Cruise). Reacher, a nomadic man with no ties, shows up anyway after hearing about the shooting and wants to help prosecute Barr against the will of his attorney (Pike). What Reacher uncovers though is a little bigger than just one man fighting to be proven innocent and this ex-military detective will have to go to some gray areas to make sure that justice is served.

To be honest, the plot of "Jack Reacher" seemed a little tired to me. Oh look, it's a framed man who needs a detective to find the real killer! Oh jeez, it's a huge conspiracy! It's the same damn idea that most thrillers are based around and here it's not all that epic and/or clever. Granted, it does have a few moments of intriguing writing including the rather odd appearance of Robert Duvall in the latter half as a randomly appearing sidekick of sorts which worked for me for some weird reason, "Jack Reacher" is less about the plot and more about watching the title character walk around putting together clues like Sherlock Holmes and occasionally punching guys. The plot might not be all that thrilling, nor was it all that smart, but it worked to keep us occupied and get us to where it needed to go.

That's what makes "Jack Reacher" unique. It's less about plot and more about character. We get some fascinating characters throughout the film, most are underdeveloped like an of our villains and I could have used more of the father/daughter issues for the two attorneys working the case, but dammit if I wasn't completely enamored with the title character. Cruise is a strong actor, whether or not he's like the book is irrelevant to me, and the way they build Jack Reacher is awesome. He's a far more interesting mystery than the plot. They give you enough information to get an idea of him at the beginning, but when it comes to his arrogance and general smart ass attitude towards everything - this character makes this movie.

Not only do you get this cynical and questionable hero for a lead, but the writers/director were smart enough to add in a handful of action sequences for him to kick ass in. "Jack Reacher" is far from an 'action' movie, but when the action scenes pop up - they are well placed and effectively shot. From a nut punching street fight, to an oddly hilarious bat and bathtub sequence, to the climactic Jack McClane versus Ethan Hunt fist fight in the rain I loved each action piece here. It was done in a realistic tone with surprising effectiveness and was easily the biggest surprise of the film.

"Jack Reacher" might not re-write the thriller or even be the best thriller I've seen this year, but I'll be damned if I wasn't completely drawn into the film. It has an awesome lead character and the action sequences were all immaculately placed and shot. Although I wouldn't call this a great film, it was entertaining as hell and I am more than stoked for it to be franchised. Jack Reacher is an 80s anti-hero for a modern age and I'm more than excited to see what else they come up with for him to kick ass at.

*On a side note, I love how ridiculous the home video cover is with the American flag on it. It's TERRIBLE.