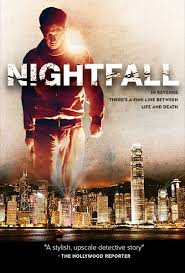 When thrillers are a dime a dozen, the best way to go about one is to make the execution as strong as possible. Despite a rather basic thriller plot and a simple enough mystery to figure out, "Nightfall" is one of the stronger modern thrillers I have see. Why is that? Three reasons: Simon Yam, Nick Cheung, and Chow Hin Yeung Roy. Between the three of these men, "Nightfall" comes off as an impactful and effective thriller. It has strong atmosphere and a stunning cast that make it a sleeper hit for the year.

When a famous classical musician is found dead and pulled from the sea, Detective George Lam (Lam) is given the task to find his killer. When he discovers that a recently released violent criminal (Cheung) has ties to the musician in the case that got him put away, he begins to investigate. What he finds out indicates that not only is this newly free man involved, but that the murder he committed 20 years prior might hold the key to uncovering a larger hidden truth.

"Nightfall," generally speaking is a rather by the numbers thriller layered with a bit of old school mystery film. The plot, although intriguing in it's own ways, is pretty predictable beyond one moment involving the birth of the daughter of the musician which even caught me a little by surprise. Otherwise, "Nightfall" tends to follow the well treaded paths of forlorn detectives and misunderstood criminal behavior that runs rampant in films of this ilk. Occasionally the film does take an interesting twist, including an opening fight sequence with brutal consequences, and it was enough to keep my interest pegged. For that I'm grateful.

What elevates this basic thriller is how strongly the film is executed. Director Chow Hin Yeung Roy adds in plenty of great artistic nuance to atmosphere of the film and when the film requires a bit of tension or light action, including a pretty impressive fight on board of a cable car, he pulls it off to keep the tension up and the plot moving. This is partnered with two stunning performances from our two leads in the film - Yam and Cheung. The two rarely share moments on screen and neither character is dialogue heavy (hell, one of them is mute), but their strength as actors adds a lot of great presence to the film and easily knocks a relatively by the numbers thriller up to being one of the better thrillers I've seen recently. I wish the same could be said for the hit and miss supporting cast who range from solid (Lam's partner) to cheesy (the musician). Luckily, most of them don't get a lot of screen time.

If you are a fan of strong detective stories or are simply looking for a well executed escape from the norm, "Nightfall" delivers on both accounts. It's an excellent little mystery film and one that hit all the marks needed to satisfy. It's strong with its atmosphere and even though it relies a bit too much on the strong screen presence of its two lead actors, it's an effective movie that kept me right along with the plot. It comes highly suggested here at Blood Brothers!