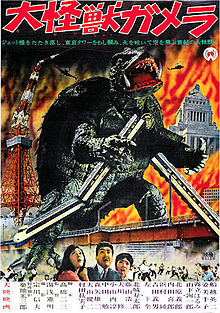 Aka "Gammera the Invincible", "Gamera", "The Giant Monster Gamera"

Giant monsters were racking in the cash at the box office and by the mid-sixties and Toho had a monopoly on the Kaiju genre with their “Godzilla” franchise crushing all the competition. It wouldn’t long before other studios wanted a piece of that big green guy's pie thus knock-offs began to sprout up and non-more than Daiei’s “Gamera” series (many times spelled “Gammera” for American release). Unlike many other Kaiju films, “Gamera” became extremely popular in its native Japan, so much it even sprouted its own franchise and gave Big G some serious competition at the box office.

With the cold war raging a plane goes down in the Arctic Circle causing a nuclear explosion thus releasing the ancient monster known as Gamera from his icy tomb. It isn’t long before he’s stomping his way through Tokyo, eating fire and gasoline and killing innocents along the way. In order to rid the country of this giant menace, the Japanese government devises Plan Z in order to trap Gamera and blast his sorry ass straight to mars… but will the insane plan work? 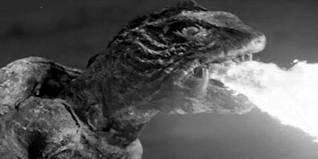 Since “Gamera: The Giant Monster” is a direct result of the success of “Godzilla” it’s hard not to make comparisons as there are similarities in the story, design and characters. Hell the poster artwork even has Gamera demolishing a train similar to the memorable scene in the original "Godzilla". The similarity doesn’t stop with the “Godzilla” franchise as there is even a light house attack mimicking the sequence in the popular American film “The Beast from 20,000 Fathoms”. However compared to Godzilla, Gamera is quite a bit dorkier. How could he not be when he’s a giant saber toothed, fire breathing turtle compared to a giant mutant fire breathing dinosaur. The silliest aspect of Gamera is that he has to be his ability to shoot fire out his limb openings, spinning around like a top flying through the night sky like a freaking UFO. The sight of this is hilarious beyond belief. 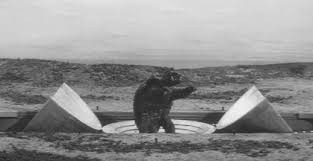 Compared to the original “Godzilla”, “Gamera: The Giant Monster” isn’t near as good. Hell it isn’t even as good as most of the Godzilla sequels released in the 60s. However for a ‘guy in a rubber suit' film about a giant monster stomping the shit out of Tokyo, “Gamera” is damn entertaining and is easily the best of the knock-offs that “Godzilla” inspired. Audiences seemed to agree and “Gamera” was a hit at the box office and it wouldn’t be long before sequels would be churned out at an inane pace. The sequels go as follows: “Gamera vs. Barugon”, "Gamera vs. Gyaos", "Gamera vs. Viras", "Gamera vs. Guiron", "Gamera vs. Jiger", "Gamera vs Zigra", "Gamera: The Super Monster", "Gamera: Guardian of the Universe", "Gamera: Attack of the Legion", "Gamera: Revenge of Iris" and "Gamera the Brave".

Written By Eric Reifschneider
Posted by Cronosmantas at 7:13 PM