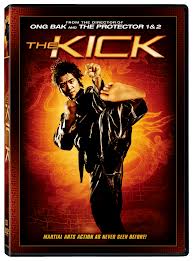 The combination of Korean cinema and the ridiculously awesome stunt work of the Thai film scene made "The Kick" a must see for me whether or not it was 'good.' Coming from Thai action director Prachya Pinkaew and having Thai action star Jeeja in a supporting role, this film is automatically a must see for action fans. Although it has a ton of potential, it tends to fall into being a mediocre film due to some over the top elements and cheesy acting. Luckily, it also happens to be completely and utterly awesome with stunt work and action set pieces - just like the Thai films we have come  to love.

When a priceless antique dagger is returned to Thailand, an evil villain who collects antique daggers (?!) decides he needs to steal it. Fortunately, his initial plot to swipe the artifact is thwarted by a family of Tae Kwon Do performers who stop him. Now he's out to get revenge against the family by killing them and finally getting his dagger for good. Can the family put aside their differences and come together one last time to save one another?

Initially, I wasn't all that sold on "The Kick." It starts off with this pseudo-melodramatic sports moment that felt a bit tired and cliche and then it kicks off to a pseudo-family drama about how the father forces his family to practice Tae Kwon Do and how the son just wants to be a dancer. Well, I didn't expect to see an ABC Family movie here. Luckily, this portion of the film is almost a subplot and foundation just to get us where we need to be for action. Pretty soon we get to our main issue - an evil person (who is not explained to why he collects daggers or if he's mafia or anything) and how the family thwarts him in what he wants. Although the family drama rears its head a few times, particularly with the son's dreams versus his father's dreams, it doesn't come off as silly as the intro and it works to give us a reason for some of the plot work ahead.

From this point, "The Kick" might find itself forcing some moments including a kidnapping where the villain ties a roll of dynamite connected to an old school clock for a bomb, but the action saves the film from some missed moments of humor and rather silly plot progressions. We are introduced to a family friend and his daughter (played by Jeeja) who join the family in fending off a slew of baddies and two henchmen who are out to kill them. The stunt work is particularly impressive as we get both bouts of Tae Kwon Do and Jeeja's skills as a Muay Thai artist. In true Thai film fashion, they are willing to throw any cool setting into the mix for awesome stunts and fight work - including a zoo with glass ceilings, animal cages with low hanging metal fans, an croc pit, a grass hut in the wilderness...the list goes on and on. It might be more obvious that the actors of the family were hired more for their fight prowess than acting prowess, but it works. In particular, the family's eldest son has some series hops when it comes to flips and bouncing during the fights and in classic Pinkaew style - uses an elephant at the end as a prop for some sweet stunts.

Even if the story and rather by the numbers script leaves something to be desired, the film slathers on enough sweet fighting and stunt work to satiate the work action fan's craving. For Thai action fans, this is a must simply for being directed by Pinkaew and having a too brief but effective supporting role for Jeeja. I wouldn't call this his best film by a long shot, but it works for what it is - a great entertaining time.