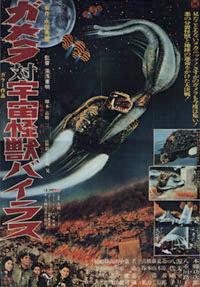 The Gamera series is falling from grace… FAST as they continue to become more kiddish in their approach. However that isn’t the greatest sin that “Gamera vs. Viras” commits. What is that you ask? Well like what the “Godzilla” franchise eventually succumb to, the filmmakers decide to, shutter, use god damn STOCK FOOTAGE! I’ve made clear how much I despise stock footage in other reviews and nothing cheapens a film, or a franchise for that matter, faster than recycling footage from previous films.
A hostile alien race visit Earth only to have their ping pong ball ship fucking trashed by Gamera. Upon a sending another ship they decide to take control of Gamera and kidnap two boy scouts (sheesh…) and attempt to take over the world. Good thing one is a boy genius and is great with electronics thus frees Gamera from their mind control in order to fight the common cold… no it’s “Viras” not “Virus”, which means a giant fucking squid.
Our two main child characters are annoying as they unsuccessfully try to convey comic relief with the trouble they cause for adults and aliens alike while they run around free on the alien ship that looks like a ping pong bumble bee orgy. Oh I wish for the days of adult characters ala “Gamera vs. Barugon”!  The lower budgets are also starting to show through with lower grade special effects and… you guessed it… STOCK FOOTAGE, about 19 minutes of it too be exact. What’s rather humorous about this stock footage is scenes utilized from the original “Gamera: The Giant Monster”, which of course was filmed in black and white. Nothing like hiding your use of stock footage then by blatantly splicing in black and white footage into your color fucking film!
The plot is simple and childish trying to appeal more to the young demographic, regulating this fourth “Gamera” film to debut on television in America under the title “Destroy All Planets” (to capitalize on the “Godzilla” film “Destroy All Monsters”). There is some dumb campy fun to be found here but it’s easy to see the quality of the film products dropping fast in this franchise and the giant monster battle only occurs in the final 10 minutes. Sadly the initial run of the “Gamera” series would only continue to get worse from here.