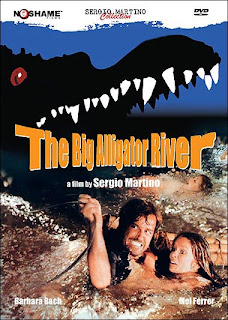 Aka "The Great Alligator", "Alligator"


As one can tell from my brothers “Croc of Shit Marathon” there are an insane amount of giant killer crocodile/alligator films in today’s film market, so much that it easily overflows the shitter making its way to water damaging the carpet in the bedroom. Well it’s time for me to jump into this marathon and review one of the first, if not the first giant killer croc/alligator films. For this we have to leap across the Atlantic and land in Italy, home of some of the greatest (and worst ) horror schlock cinema. Let’s see where cult director Sergio Martino’s film falls in the spectrum and giant killer croc flicks…

Just because this could possibly be the first giant killer croc movie doesn’t mean it’s necessarily original, I mean we are talking about Italian cinema here, the pioneers of ripping off more popular Hollywood films. Despite having a giant killer croc “The Big Alligator River” is a complete “Jaws” clone except in a jungle setting. A photographer travels to newly built remote resort in South America only to discover a giant killer croc/gator (whom the natives worship as a God) has reappeared and starts killing off the tourists. Will resort management listen? Oh hell no! They don’t want possible deaths to ruin their profit! Can our photographer and his new hot girlfriend (the drool worthy Barbara Bach) kill the giant beast? Will the audience still be awake before they do?

“The Big Alligator River” (one of numerous titles this film hides under, including “Alligator” but please don’t mistake this for the hellaciously entertaining 1980 film of the same name) is the third film of Sergio Martino’s jungle horror adventure 'trilogy' following “The Mountain of the Cannibal God” and “Island of the Fishmen” and is easily the least entertaining of the bunch. Whereas those flicks had plenty of trash worthy entertainment value, “The Big Alligator River” is just mostly dull with only a few absurd special effects sequences to keep attention by unintentional laughter (these ‘special’ effects could easily rival those in “The Ghost Galleon”)

I was expecting some more trash entertainment value from “The Big Alligator River” considering the cast and crew involved (I mean it’s got Mel Ferrer for Christ sake) but alas I was mostly bored throughout the running time with only Barbara Bach’s beauty and some lame special effects to hold my attention. This just proves that most giant killer croc/gator films were just as bad at the beginning of this subgenre cycle in the 70s as they are today. I will admit I will still take bad miniatures and puppets any day over todays god awful low budget CGI effects.