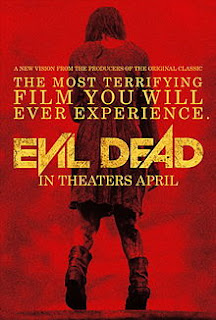 The original "Evil Dead" films were one of the reasons I became a film critic. And a fan. And studied it in college. Right from a ripe young age, those films had an impact on me. As I grew older, the impact only heightened as the series took on a greater cult status leading me to become the horror fan I am today. So needless to say with Raimi, Campbell, and Tapert sitting as producers, I actually had my hopes up for this film. Slap on an intense trailer, issues with an NC-17 rating, and rumors flying about people passing out and leaving early showings because it was 'too violent' and my expectations were through the roof. So let me alleviate some of your questions by just saying that this 2013 re-imagining of "Evil Dead" is utterly...groovy.

Mia (Levy) is finally gonna kick the smack. With the help of a handful of friends and her long time missing brother David (Fernandez), she heads out to an old family cabin deep in the woods away from civilization to kick that nasty habit cold turkey. Too bad that in the time their family has been away, something terrible has come to their forgotten cabin. It brought a nice little book too. A book, that when read aloud, can resurrect sleeping demons. Demons out to possess the living and take a few souls. Demons ready to bring about an end to life...

If you haven't seen the original films (which if you haven't and you call yourself a horror fan, then shame on you), that's okay. This "Evil Dead" does not require previous knowledge to understand the film. There is plenty of fan service that happens here as the film pulls some memorable moments from the original like a vicious tree assault or the inclusion of a silly magnifying necklace, but it's not necessary. If you know the originals, then it actually enhances the viewing experience here as one can pick up on the details and homages while appreciating what director Fede Alvarez adds to the story. It's the best of both worlds right off of the bat.

Which does lead us to the basic premise of the film, now something of a horror staple, as our twenty-something friends all head to the isolation of a creepy cabin to encounter terror. This time around there is a bit more meat to the bones as we are given a good reason to be there due to one of our characters having to kick a drug addiction. This leads to some pretty strong performances from our group, even if the film occasionally succumbs to rather underdeveloped side characters like Natalie who sort of just hangs out, and it lets the film build some tension in the first act. Alvarez works the cabin and visuals like a true Raimi apprentice with unique shots and clever pans here to give us some nice visuals to help us get the atmosphere of the film. Although I wish they would have added a bit more to the characters and some of their back stories, it does set up the final two acts nicely.

Two acts that work at such a stark lightning pace that its hard to keep your breath when shit starts to hit the fan. By shit, I actually mean gore. By gore, I actually mean GORE. By GORE, I actually mean "holy shit, how did they get away with putting something that fucked up in a rated 'R' film?!" "Evil Dead" is balls out intense for the last half of the film and it does not leave the imagination much to work with. Some might say that's a cheap knock to just go for the gore instead of the scares, but I'm pretty certain that my imagination could not come up with some of the visuals that "Evil Dead" conjures up. I'm not going to give away too much of the gore and kills as it's a definite highlight of the film, but Alvarez does not hesitate to go there. We get some classic stuff like the 'farewell to arms' and the cellar frights, but "Evil Dead" ratchets it up to the next level with crazy additions that's drowned in blood by the finale (where blood seems to rain from the sky). I also appreciated that "Evil Dead" went for real effects and gore instead of that crap CGI stuff too many films use as it really adds to the 'realism' and 'horror fun' of the film. Not to mention that as a horror fan, I'm pretty sure Alvarez pulled some ideas and style from Bava's "Demons" to mix in here...which is only for the best.

Both fans of the originals and those new to the series are going to love "Evil Dead." It is not for the faint of heart as it will get you to gag once or twice (or slow clap like someone in my theater did at the final chainsaw moment) with its relentless violence and over the top gore, but if you can stomach it then "Evil Dead" is a must see horror experience. It is one of the few 'remakes' worthy of your time as it carries the same heart as the original while taking a new spin with the foundations.