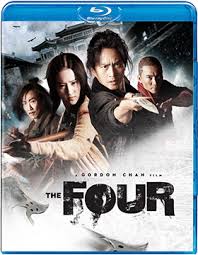 Although Gordon Chan has been relatively hit or miss with films lately (too often his visual style has to carry sub-standard scripts so it’s not really his fault), I was pretty excited to see "The Four." The film seemed like a kung fu superhero film mixed with a bit of "Detective Dee" mystery to spice it up and, if anything, "The Four" looked entertaining as hell - which fits my tastes quite nicely. As is, the film is quite entertaining, despite some nagging issues, and any fans of old school kung fu will find plenty to love in its hijinks and ridiculous characters.


Something is awry as a government run detective police force investigates a stolen coin cast that has been producing a mass amount of counterfeit currency. When a separate 'divine constabulary' is also tasked Zhuge Zhenwo (Anthony Wong) is tasked with building a better detective agency to solve the mystery. He recruits Emotionless (Liu Yi Fei), Iron Hands (Collin Chou), Life Snatcher (Ronald Cheng), and a rival detective Coldblood (Chao Deng) to be the ultimate team to solve the mystery as it unravels into a massive conspiracy with a very powerful sorcerer behind it.


To be fair Gordon Chan only co-directs this film with Janet Chun, but his visual fingerprints are all over it. The over the top wire work fight sequences, the sometimes awkward use of CGI special effects, and the basic broad stroke characters all make their appearances here, albeit in slightly better balance with plot and acting than the last handful of his films. "The Four" wasn't quite the return to form I was hoping for Chan, but it's an improvement.


Despite it's serious sounding thriller/detective plot, here seems to be a greater sense of 'fun' that accompanies all of this. "The Four" is massively entertaining if you are willing to run with the film. At first, the film is a bit hard to swallow as we are essentially thrust into the center of this martial arts world where two competing detective agencies (each with very different tactics in going about crime solving) are in the middle of a case. There is a bombardment of different characters and mid-plot placement to combat your senses at this point. Once you start to get the feel of what the film is producing and the characters take shape and alliances, that's when "The Four" starts to push its entertaining elements to the front and the story smooths out for better flow.


In the opening paragraph I mention that the film plays out like a kung fu superhero flick and I'm sure that has left some of you curious. This is perhaps the most unique thing about "The Four." We've seen wire fight choreography before and we've seen ridiculous fantasy elements injected into those kinds of films, but "The Four" takes more influence from American super hero films rather than films like "Storm Warriors." Our title four heroes each have a specific power (although why or how is generally not discussed) that is cohesive with various fight styles. Life Snatcher has wicked blue flaming kicks, Iron Hands has orange blasting punches, Coldblood has green glowing sword skills, and Emotionless uses telekinesis to kick ass and levitate shit. Believe it or not, outside of an unexplained and odd Hulk like monster shifting ability that is never explained for Coldblood, the fantasy elements actually added onto the fun of the film instead of detracting from it. The villain they battle is delightfully evil (at times reminding me of the bad guy from the cartoon Dudley Do-right except, you know, with fire powers and a horde of ice zombies to fight for him) and the way that the film progresses in the latter half had me completely engrossed. Rarely do I enjoy fantasy influenced kung fu, but "The Four" hit some nice balances here.


"The Four" feels like a great franchise film kick off. It has its flaws including way too many characters, some unexplained elements, and some horrible CGI moments, but overall the experience of watching "The Four" was a riot. It was light hearted and entertaining as hell. Now I'm just looking forward to the inevitable sequel.