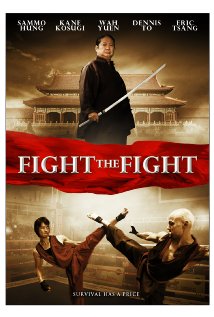 Modern kung fu flicks seem to be getting more hot and miss as time goes on. I understand that this is mostly due to the world being smaller, i.e. there are more films being distributed at faster paces in places like the US. It still doesn't forgive some of the mediocrity the genre is seeing. Like "Fight The Fight." A film whose cast should have instantly made it memorable and/or awesome, yet comes off about as generic as it gets failing to pull on the heart strings with its underdog plot or impress with its fight work. It just falls flat.

After studying abroad for quite some time, a chance visit from his father (Sammo Hung) sends Wai Yip Chan (Tin-Chiu Hung) and his Japanese best friend back to his home in China. There they discover that his father's Choy Li Fut martial arts school is to be bought by a large fitness corporation due to its stellar reputation. Wai Yip Chan bargains the negotiator to a small tournament to see if the school will remain independent.

Two schools of fighters fighting for reputation? Now that has never been done in a kung fu movie before! If the sarcasm escapes you, this is perhaps the most cliche plot in martial arts cinema. Despite the modernization of the tale (science and corporate greed versus history and heart), "Fight The Fight" doesn't add a whole lot of anything to it either. With an execution that's mostly miss, there isn't a whole lot to draw one to the film as it sort of retreads a very well worn story.

And the execution ranges from mediocre to down right terrible too. The modern style fight sequences with some MMA mixed into classic choreography? Mediocre. The pacing and predictability of the three fight finale? Terrible. The acting of our protagonists? Mediocre. The dialogue and love triangle they have to play out? Terrible. It's as if the film makers couldn't decide if they wanted to make a 'so bad it's good' film or attempt at decency...which probably lead it to being worse than both. I would rather have a film be memorable for being bad, than being just good enough to be forgettable. It's too bad "Fight The Fight" falls into the latter.

Not only is the film forgettable (sans that horrific score which will haunt my dreams for years to come), but the reason I watched the film - the stellar supporting cast are so significantly underused it was frustrating. Sammo Hung is a glorified cameo (and a phoned in one at that), Kane Kosugi is decomposed to the best friend role where he does nothing until his one fight scene in the finale, and Wah Yuen sits in a chair for three-quarters of the film. There is one fight between Wah Yuen and Sammo that's horribly green screened as sort of a fantasy glazed flash back, but it's silly and non-impactful. With that much talent, you would have thought they would have tried to at least attempt something cool. Nope.

"Fight The Fight" isn't the worst film I have ever seen, but it doesn't make the cut as a good or all that enjoyable film. There was a bit of potential in the concept and casting, but the rest is a let down flip flopping around like a fishing dying on the beach. Unless you are a die hard fan of any of the cult actors then I suggest a big ole skip on this film.