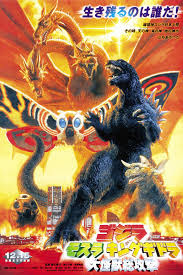 
After fan disappointment and poor box office returns with “Godzilla vs. Megaguirus” Toho knew they had to get their act together or else their third era of the “Godzilla” franchise would come to an end much sooner than expected. The end result with the exhaustive title “Godzilla, Mothra, and King Ghidorah: Giant Monsters All-Out Attack” (why didn’t they just call it “Giant Monsters All-Out Attack”?) not only proved to be arguably the best of the Millennium era of the franchise, but one of the best “Godzilla” movies overall.

The plot is again a ‘reboot’, ignoring all previous films except the original 1954 “Godzilla” (hmmm… this is becoming a trend here and I’m not liking this aspect). It seems Godzilla has returned after decades of slumber to wreak havoc on Japan. A reporter and some friends uncover some legends of ‘good’ monsters (Mothra, King Ghidorah and Baragon) and head out to release them from their prisons in order to self defend their homeland against Big G.

What I truly love about this entry is how fucking evil Godzilla is. Not only is he far removed from that ‘hero of the earth’ bullshit that infected that latter half of the original run of the franchise, but he is just pure animalistic evil bent on killing and destruction… what Godzilla should be damnit! His new look only heightens his evil nature with his more traditional suit design with blank, white, soulless eyes. Bring back familiar monsters for fans was also a smart move as Mothra gets an amazing update and having King Ghidorah as a ‘good monster’ was a nice twist. The underground burrowing beast Baragon, the least known of the monsters, was a nice addition (even though he didn’t get his name in the title) as he is an underrated monster that first appeared in “Frankenstein Conquers the World” and “Destroy All Monsters”.

The plot has plenty of hogwash moments, especially how Godzilla is fueled by the souls of dead Japanese soldiers during World War II. Uhhh.. what?! And there’s an old dude that has a connection to King Ghidorah that just gives me chuckles but what’s a Godzilla movie without some ridiculous plot elements. Toho also went all out with fight sequences as Godzilla and the other monsters are absolutely destructive to the max, with filmmakers even going to great lengths to show all the damage they cause and people they kill. So much in fact that it might bother some young kids that try to watch it. 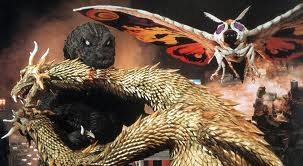 "Godzilla, Mothra, and King Ghidorah: yadda yadda yadda” is one of my personal favorites of the franchise and it is hands down one of the best entries… period. The addition of fan favorite monsters, heightened special effects, Godzilla’s mega evil presence and overall destructive and violent nature of the film kept me glued to the screen. Hell even some of the ridiculous plot elements got me to chuckle with glee. Definitely one of the must see entries of the series that easily makes up for the misstep with “Godzilla vs. Megaguirus”.

Godzilla will return in "Godzilla Against Mechagodzilla"

Written By Eric Reifschneider
Posted by Cronosmantas at 9:23 AM