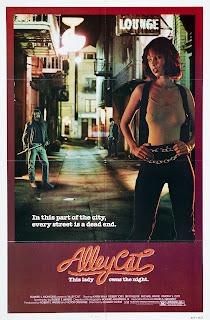 
I have a soft spot for revenge flicks of the 70s and early 80s, especially gritty urban flicks in the mold of “Savage Streets” and “The Exterminator”. When news broke that Scorpion Releasing was unleashing the 1984 urban revengesploitation flick “Alley Cat” on DVD I quickly snagged it hopping for some homegrown urban revenge goodness. Well it is a homegrown urban revenge flick… but good? Hardly. Let’s just say it’s in the mold of films like “Savage Streets” and “Angel” but not near as entertaining as either.

Karin Mani is fed up with crime in her area of the city so she earns a black belt in karate to take care of scum that try to steal her tires and rape her when she’s jogging (which seems to happen all the time). Her anger begins to boil when her grandparents are attacked, causing the death of her grandma. Her anger boils over when she stops a rape only to be jailed for use of a fire arm without a license. Now the shit hits the fan as she beds a hunky young cop to get vengeance on the douche bags that killed her G-Ma. 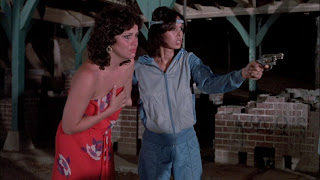 Karin Mani is a sexy little thing that pulls her weight in both kicking ass and look hot while doing it but the problem lies with her acting… and what’s sadder is she is the best of the cast. Her boyfriend and gang leader give cringe worthy  performances so the mish-mash of three different directors (holy shit!) load up the film with exploitative nudity to make up for the lack of likeable characters… I mean LOTS of nudity so fans of female flesh will be served plenty of skin to look at (with our main star even gracing the audience with a full frontal shot). I did get a little annoyed at the INSANE decisions she makes, like always jogging in the middle of the night. It’s not like she’s looking for trouble on purpose Paul Kersey "Death Wish" style, she just jogs at night and nearly every time some goons attempt to rape her. Go to the gym for Christ sake! 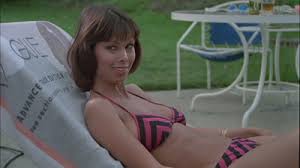 “Alley Cat” has some trash entertainment value but falls short compared to other similar films in the genre, especially when it comes to gritty violence. The combination of three separate directors gives the film a somewhat disjointed feel and the atrocious acting can make some portions of the film hard to sit through. Thankfully when this ‘pussy’ gets aroused it results in enough nudity to keep the attention of the mostly male audience. If you want to add “Alley Cat” to your revengesploitation collection, make sure to pick up the Scorpion release as the old Legacy DVD is a poor full screen transfer.

Written By Eric Reifschneider
Posted by Cronosmantas at 7:19 PM