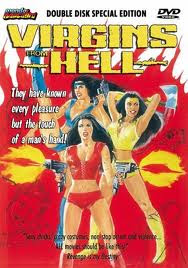 
With a name like “Virgins from Hell” one knows they aren’t going into a critically acclaimed masterpiece. A title like that wears on its sleeve what it is – an exploitation picture. But not just any exploitation picture - an exploitation picture from Indonesia. It’s also a hodge podge of different subgenre’s, including biker films, action films, women in prison films and revenge films all rolled into one. All this coming from a country ripe with entertaining trashy goodness? Oh yea, it’s going to be an exploitative good time. A female biker gang robs and burns down a casino owned by a man that killed the parents of the biker leader to gain their land. The bikers are caught, thrown in prison where a new aphrodisiac is tested on them to make them willing for anything. They escape, action ensues and revenge will be taken.

The biker gang is made up of all sorts of sexy Indonesian babes that wear ludicrous outfits to entertain the audience. These outfits just make the action scenes all that more hilarious to see ridiculously dressed women riding motorcycles and firing machine guns. Sadly exploitation fans will be disappointed with the lack of nudity present in the picture as there is literally none and the women keep their colorful outfits on throughout the picture. Some ridiculous Indonesian mysticism is also thrown in the mix to make the film even more fun, like a magician using a snake to take the bullet out of a guy’s leg…. yummy.

“Virgins from Hell” is a deliciously entertaining exploitation picture that only the likes of the Rapi film corporation out of Indonesia could supply (they also are responsible for all the glorious Barry Prima films). The lack of nudity might disappoint some fans but the jigsaw plot of popular exploitation film subgenres, outrageous outfits, plethora of sexy babes and tons of lifted musical cues from more popular American/Australian films (including “Dune”, “Rambo: First Blood Part II” and “Mad Max: Beyond Thunderdome”) make this a fun ride for exploitation film fanatics.

Written By Eric Reifschneider
Posted by Cronosmantas at 9:20 AM