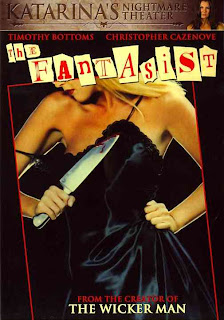 
Robin Hardy accomplished what many first time directors can only dream of – nailing a cult classic home run with his debut film with “The Wicker Man”. Though not a hit on its initial release, theatrical reshowings earned the film favorable reviews and praise by both critics and cult film fanatics alike. It has even earned a position as one of my personal favorite films of all time. Hardy must have felt satisfied with the reception of his debut film as he didn’t feel necessary to direct another motion picture, that until 16 years later with “The Fantasist”. For years “The Fantasist” was considered ‘that other film’ that Hardy directed, quickly brushed over and not given any attention on its initial released and it faded into oblivion on video store shelves where it made its United States debut. Now all these years later and seeing the film on DVD, it’s easy to see why it was so easily brushed over as Hardy suffered a serious case of what is commonly known as the ‘sophomore slump’.

After arriving in Dublin, a virginal school teacher becomes the target of a kinky psychopath that calls his victims before murdering them by forcing them to pose like his favorite painting. 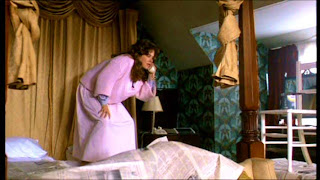 Though Hardy has only directed three films to date (including “The Wicker Tree”), he has a trademark style that includes quirky, perverse characters and “The Fantasist” is loaded to the brim with bizarre red herrings to keep the audience guessing who the killer is. Also laid on thick is religious repressed sexuality, which is just as solid as his two “Wicker” films. The problem with “The Fantasist” is that it starts with a bang and ends with a bang, but everything in between is just uninteresting tedium with our lead character (Moira Harris, wife of Gary Sinese) making insane decisions when it comes to the company she keeps. 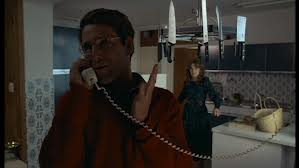 Since “The Wicker Man” is a favorite of mine I truly wanted to like “The Fantasist” and I ignored everyone’s opinion on how passible it is. Well, they were right, as it is downright dull with no build-up and quickly forgotten after viewing due to its lifeless plot. By the time the perverse ending shows up the audience has completely lost interest, which is a damn shame since the acting and Irish locations are damn great. It wasn’t worth the 16 year wait as fans of his debut and cult viewers looking for a horror film with some slasher and/or giallo elements are going to be sorely disappointed.